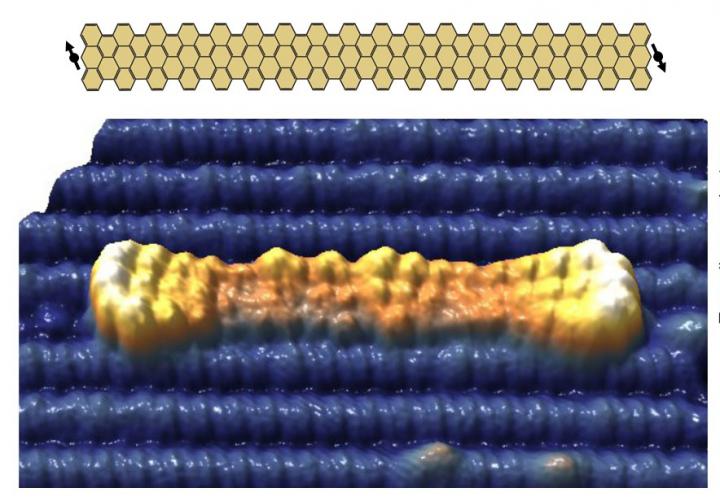 Scientists synthesized graphene nanoribbons, shown in yellow, on a titanium dioxide substrate, in blue. The lighter ends of the ribbon show magnetic states. The inset drawing shows how the ends have up and down spin, suitable for creating qubits.
Credit: ORNL, U.S. Dept. of Energy

Graphene is composed of single-atom-thick layers of carbon taking on ultralight, conductive and extremely strong mechanical characteristics. The popularly studied material holds promise to transform electronics and information science because of its highly tunable electronic, optical and transport properties.

When fashioned into nanoribbons, graphene could be applied in nanoscale devices; however, the lack of atomic-scale precision in using current state-of-the-art “top-down” synthetic methods — cutting a graphene sheet into atom-narrow strips – stymie graphene’s practical use.

Researchers developed a “bottom-up” approach — building the graphene nanoribbon directly at the atomic level in a way that it can be used in specific applications, which was conceived and realized at the Center for Nanophase Materials Sciences, or CNMS, located at the Department of Energy’s Oak Ridge National Laboratory.

This absolute precision method helped to retain the prized properties of graphene monolayers as the segments of graphene get smaller and smaller. Just one or two atoms difference in width can change the properties of the system dramatically, turning a semiconducting ribbon into a metallic ribbon. The team’s results were described in Science.

ORNL’s one-of-a-kind expertise in scanning tunneling microscopy was critical to the team’s success, both in manipulating the precursor material and verifying the results.

“These microscopes allow you to directly image and manipulate matter at the atomic scale,” Kolmer, a postdoctoral fellow and the lead author of the paper, said. “The tip of the needle is so fine that it is essentially the size of a single atom. The microscope is moving line by line and constantly measuring the interaction between the needle and the surface and rendering an atomically precise map of surface structure.”

In past graphene nanoribbon experiments, the material was synthesized on a metallic substrate, which unavoidably suppresses the electronic properties of the nanoribbons.

“Having the electronic properties of these ribbons work as designed is the whole story. From an application point of view, using a metal substrate is not useful because it screens the properties,” Kolmer said. “It’s a big challenge in this field – how do we effectively decouple the network of molecules to transfer to a transistor?”

The current decoupling approach involves removing the system from the ultra-high vacuum conditions and putting it through a multistep wet chemistry process, which requires etching the metal substrate away. This process contradicts the careful, clean precision used in creating the system.

To find a process that would work on a nonmetallic substrate, Kolmer began experimenting with oxide surfaces, mimicking the strategies used on metal. Eventually, he turned to a group of European chemists who specialize in fluoroarene chemistry and began to home in on a design for a chemical precursor that would allow for synthesis directly on the surface of rutile titanium dioxide.

“On-surface synthesis allows us to make materials with very high precision and to achieve that, we started with molecular precursors,” Li, a senior author of the paper who led the team at CNMS, said. “The reactions we needed to obtain certain properties are essentially programmed into the precursor. We know the temperature at which a reaction will occur and by tuning the temperatures we can control the sequence of reactions.”

“Another advantage of on-surface synthesis is the wide pool of candidate materials that can be used as precursors, allowing for a high level of programmability,” Li added.

The precise application of chemicals to decouple the system also helped maintain an open-shell structure, allowing researchers atom-level access to build upon and study molecules with unique quantum properties. “It was particularly rewarding to find that these graphene ribbons have coupled magnetic states, also called quantum spin states, at their ends,” Li said. “These states provide us a platform to study magnetic interactions, with the hope of creating qubits for applications in quantum information science.” As there is little disturbance to magnetic interactions in carbon-based molecular materials, this method allows for programming long-lasting magnetic states from within the material.

Their approach creates a high-precision ribbon, decoupled from the substrate, which is desirable for spintronic and quantum information science applications. The resulting system is ideally suited to be explored and built upon further, possibly as a nanoscale transistor as it has a wide bandgap, across the space between electronic states that is needed to convey an on/off signal.

This work was supported in part by the Center for Nanophase Materials Sciences, which is a DOE Office of Science user facility.

ORNL is managed by UT-Battelle for the U.S. Department of Energy’s Office of Science, the single largest supporter of basic research in the physical sciences in the United States. DOE’s Office of Science is working to address some of the most pressing challenges of our time. For more information, please visit https://energy.gov/science.