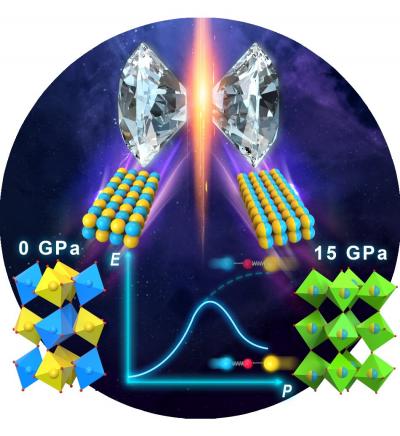 The field uses these extreme conditions that mirror the deep interior of planets to discover new materials, to modify the properties of known materials in potentially useful and even exotic ways, and to test their concepts about how materials work or to simulate what it is like inside the Earth.

Meanwhile, perovskite is both the most abundant mineral in the Earth's mantle (composed of calcium titanate, CaTiO3) and the name of any material that has the same, special crystal structure as this mineral.

Perovskite structures are of great interest to materials scientists due to multiple interesting properties that are important in a range of microelectronics, telecommunications and clean-energy applications.

Recently his lab has been synthesizing a new type of perovskite compound, called the 'double perovskites,' which has twice the 'unit cell,' or smallest possible building block of a crystal, of regular perovskites.

The findings were published in the peer-reviewed journal Angewandte Chemie published by Wiley.

The study details how the researchers exposed their latest double perovskite, composed of yttrium, cobalt, iridium and oxygen atoms (Y2CoIrO6), to varying levels of extreme pressure, and what happened when they did so.

For most materials, an increase in pressure allows for an increase in the number of atoms that can gather immediately around a central atom in a crystal (called the coordination number.

But the new double perovskite, Y2CoIrO6, did not adhere to the traditional theories that crystal structure order tends to increase with the increase of pressure.

Instead, when synthesized at ambient pressure, Y2CoIrO6 is highly ordered, but surprisingly when synthesized at 6 gigapascals (GPa, or roughly 60,000 times standard atmospheric pressure), while the unit cell did get smaller, now there was only partial ordering.

Then at 15 GPa, the researchers found disordering. Increasing pressure had inverted the normal order-to-disorder sequence that the researchers expected. In addition, the magnetic properties of the material changed

“Curiously, 15 GPa is also the pressure that you find at the boundary region between the upper and lower mantle deep in the Earth,” said Zheng Deng, another member of the team. “This is precisely where many perovskite materials form.”

“This violates our intuition about chemistry at high pressures,” Deng continued. “It means we're going to have to entirely reconsider the effects of pressure in solid-state sciences”

The discovery could permit design and synthesis of useful new materials at high pressures with attributes that would otherwise be hard to achieve under normal conditions.