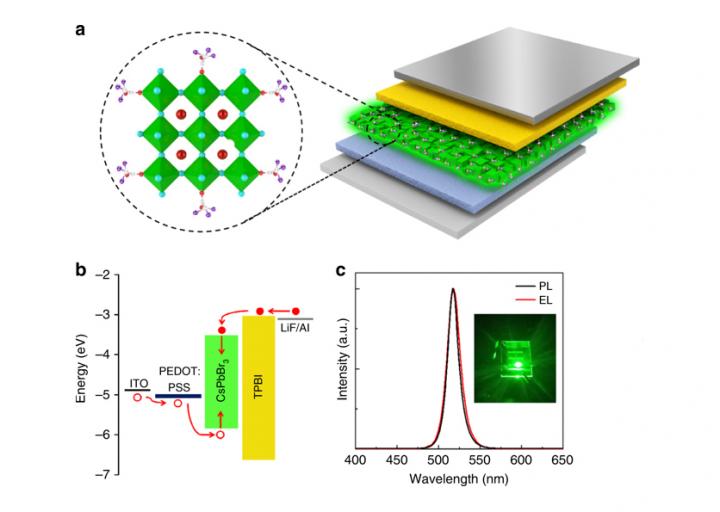 a) Device structure and a corresponding cross-sectional TEM image of the multi-layer PeLEDs; b) Schematic flat-band energy diagram of the PeLED; c) Normalized photoluminescence spectrum of the CsPbBr3 film, and electroluminescence spectrum of the PeLED at an applied voltage of 5.5 V Credit: City University of Hong Kong Usage Restrictions: The image can only be used with appropriate caption and credit.

Metal halide perovskites are regarded as next generation materials for light emitting devices (LEDs). A recent joint-research co-led by the scientist from City University of Hong Kong (CityU) has developed a new and efficient fabrication approach to produce all-inorganic perovskite films with better optical properties and stability, enabling the development of high colour-purity and low-cost perovskite LEDs with a high operational lifetime.

Perovskite LEDs (PeLEDs) are an emerging light-emitting technology with advantages of low manufacturing cost, high light quality and energy efficiency. Metal halide (meaning compounds of metals with chlorine, bromine or iodine) perovskites have recently attracted a lot of attention as promising materials for solution-processed LEDs, owing to their excellent optical properties, such as saturated emission colors and easy color tunability.

In particular, perovskites based on inorganic cesium cations, namely CsPbX3 (where X can be chlorine, bromine and iodine), exhibit better thermal and chemical stability compared to the organic-inorganic 'hybrid' metal halide perovskites, and may thus provide the base for high-performance LEDs with reasonable operational stability. But the previous inorganic PeLEDs exhibited relatively poor electro-luminescence performance due to their large perovskite grain sizes.

Now a team of researchers at CityU and at Shanghai University in mainland China has developed an efficient fabrication approach to make smooth inorganic perovskite films with substantially enhanced performance and stability. Their findings appear in the latest issue (2019, 10, 665) of the scientific journal Nature Communications, titled “Trifluoroacetate induced small-grained CsPbBr3 perovskite films result in efficient and stable light-emitting devices “.

The team has found that using cesium trifluoroacetate (TFA) as the cesium source in the one-step solution coating, instead of the commonly used cesium bromide (CsBr), enables fast crystallization of small-grained CsPbBr3 perovskite crystals, forming the smooth and pinhole-free perovskite films. This is because the interaction of TFA- anions with Pb2+ cations in the CsPbX3 precursor solution greatly improves the crystallization rate of perovskite films and suppresses surface defects.

As a result, the team has managed to make efficient and stable green PeLEDs based on these films, with a maximum current efficient of 32.0 cd A-1 corresponding to an external quantum efficiency of 10.5% – a level generally considered as satisfactory in existing PeLEDs.

More importantly, the all-inorganic perovskite LEDs based on these films demonstrated a record operational lifetime. They have a half-lifetime of over 250 hours at an initial luminance of 100 cd m-2, which is a 17 times improvement in operational lifetime compared with CsBr-derived PeLED.

“Our study suggests that the high color-purity and low-cost all-inorganic lead halide perovskite films can be developed into highly efficient and stable LEDs via a simple optimization of the grain boundaries,” says Andrey Rogach, Chair Professor of Photonics Materials at CityU, who is one of the correspondence authors of the paper.

“I foresee significant application potential of such films, as they are easy to fabricate and can be easily deposited by printing to realise various optoelectronic devices,” he adds.