Nanocellulose for novel implants: Ears from the 3D-printer 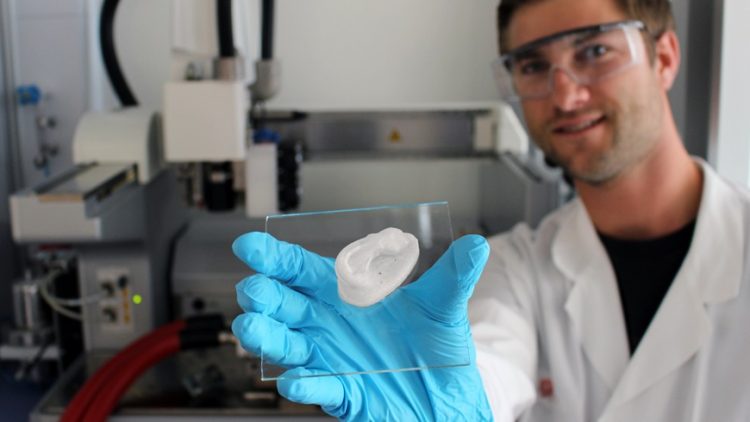 It all starts with an ear. Empa researcher Michael Hausmann removes the object shaped like a human ear from the 3D printer and explains:

«In viscous state cellulose nanocrystals can easily be shaped together with nother biopolymers into complex 3-dimensional structures using a 3D printer, such as the Bioplotter.”

Once cross-linked, the structures remain stable despite their soft mechanical properties. Hausmann is currently investigating the characteristics of the nanocellulose composite hydrogels in order to further optimize their stability as well as the printing process.

The researcher already used X-ray analysis to determine how cellulose is distributed and organized within the printed structures.

At this point in time the printed ear is entirely and solely made of cellulose nanocrystals and a biopolymer. However, the objective is to incorporate both human cells and therapeutics into the base structure in order to produce biomedical implants.

A new project is currently underway, looking into how chondrocytes (cartilage cells) can be integrated into the scaffold to yield artificial cartilage tissue.

As soon as the colonization of the hydrogel with cells is established, nanocellulose based composites in the shape of an ear could serve as an implant for children with an inherited auricular malformation as for instance, in microtia, where the external ears are only incompletely developed.

A reconstruction of the auricle can esthetically and medically correct the malformation; otherwise the hearing ability can be severely impaired. In the further course of the project, cellulose nanocrystals containing hydrogels will also be used for the replacement of articular cartilage (e.g. knee) in cases of joint wear due to, for example, chronic arthritis.

Once the artificial tissue has been implanted in the body, the biodegradable polymer material is expected to degrade over time. The cellulose itself is not degradable in the body, but biocompatible. However, it is not only its biocompatibility that makes nanocellulose the perfect material for implant scaffolds.

“It is also the mechanical performance of cellulose nanocrystals that make them such promising candidates because the tiny but highly stable fibers can extremely well reinforce the produced implant,” said Hausmann.

Moreover, nanocellulose allows the incorporation of various functions by chemical modifications into the viscous hydrogel. Thus, the structure, the mechanical properties and the interactions of the nanocellulose with its environment can be specifically tailored to the desired end product.

“For instance, we can incorporate active substances that promote the growth of chondrocytes or that sooth joint inflammation into the hydrogel,” says the Empa researcher.

And last but not least, as raw material cellulose is the most abundant natural polymer on earth. Therefore, the use of cellulose nanocrystals not only benefits from the mere elegance of the novel process but also from the availability of the raw material.

The white nanocellulose ear lies glossy on the glass carrier. Just out of the Bioplotter, it is already robust and dimensionally stable. Hausmann can give the go-ahead for the next steps.