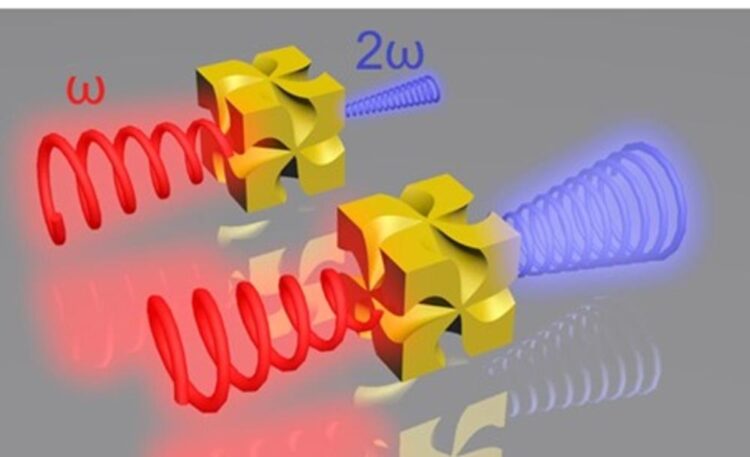 SHG signals of chiral gold nanoparticles that differ significantly for the circular polarizations of the opposite helicity.
Credit: POSTECH

The left hand looks like the right hand in the mirror but the left-handed glove does not fit on the right hand. Chirality refers to this property where the object cannot be superimposed on to the mirror image. This property in molecules is an important factor in pharmaceutical research as it can turn drugs toxic.

These molecules and mirror-symmetrical molecules have the same physical properties, and therefore cannot be distinguished using general optical analysis. Instead, polarized light – that spins in different directions – must be used. In addition, when the molecular size is small compared to the wavelength of light, it has a very weak chiral interaction between light and molecules, rendering it difficult to measure it.

In general, a signal is generated when light is irradiated on chiral nanoparticles but its intensity is very weak. Therefore, several nanoparticles had to be collected to measure the average signal. To overcome this issue, the research team succeeded in synthesizing an artificial chiral material using metamaterials, significantly strengthening the signal.

The research team measured the chiral linear scattering and second harmonic generation (SHG) scattering of one newly developed chiral nanoparticle. SHG is a phenomenon in which light with twice the frequency (2ω) of the incident light (ω, omega) is generated. Most chiral nanoparticles emit a weak SHG signal, rending it difficult to measure it.

The SHG signal of the chiral nanoparticles developed by the research team was measured to be up to 10 times larger than the linear case. This enables to measure the mirror symmetry of a single nanoparticle with high precision as well as a very small amount of chiral material, and is anticipated to contribute to the accurate structural analysis of chiral nanoparticles in the future.’

The joint research team led by Professor Junsuk Rho of POSTECH and Professor Ki Tae Nam of Seoul National University has been leading the field with continuous joint research after publishing a study on chiral metamaterial synthesis and optical properties as a cover paper in Nature in 2018.

Published in ACS Photonics, this study was led by the Korea-Germany DAAD GenKO Partnership Cooperation program of the National Research Foundation of Korea. The study received additional support from the Creative Discovery Program, Mid-career Researcher Program, Global Frontier Program, the Regional Leading Research Center program of the Ministry of Science and ICT, and support from the Ministry of Education, POSTECH Piuri Fellowship, and LG Display.