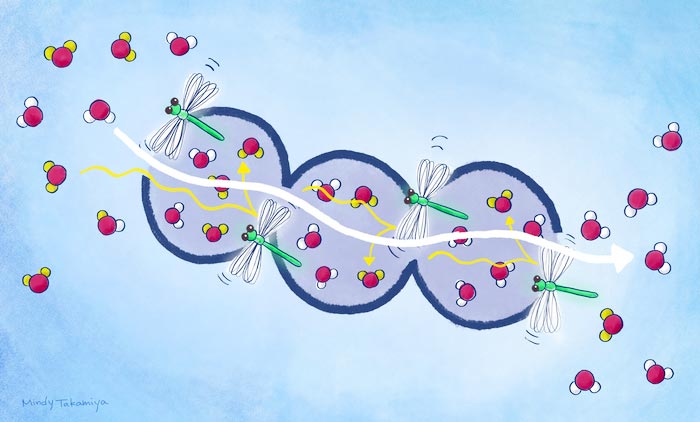 Incorporating dragonfly-shaped gate molecules into PCP/MOFs makes it a hundred times more efficient than before to separate water from heavy water, which has been difficult to separate due to their similar properties.
Credit: Mindy Takamiya/Kyoto University iCeMS

A flipping action in a porous material facilitates the passage of normal water to separate it out from heavy water.

A research group led by Susumu Kitagawa of Kyoto University’s Institute for Cell-Material Sciences (iCeMS), Japan and Cheng Gu of South China University of Technology, China have made a material that can effectively separate heavy water from normal water at room temperature. Until now, this process has been very difficult and energy intensive. The findings have implications for industrial – and even biological – processes that involve using different forms of the same molecule. The scientists reported their results in the journal Nature.

Isotopologues are molecules that have the same chemical formula and whose atoms bond in similar arrangements, but at least one of their atoms has a different number of neutrons than the parent molecule. For example, a water molecule (H2O) is formed of one oxygen and two hydrogen atoms. The nucleus of each of the hydrogen atoms contains one proton and no neutrons. In heavy water (D2O), on the other hand, the deuterium (D) atoms are hydrogen isotopes with nuclei containing one proton and one neutron. Heavy water has applications in nuclear reactors, medical imaging and in biological investigations.

“Water isotopologues are among the most difficult to separate because their properties are so similar,” explains materials scientist Cheng Gu. “Our work provided an unprecedented mechanism for separating water isotopologues using an adsorption-separation method.”

Gu and chemist Susumu Kitagawa, together with colleagues, based their separation technique on a copper-based porous coordination polymer (PCP). PCPs are porous crystalline materials formed of metal nodes connected by organic linkers. The team tested two PCPs made with different types of linkers.

What makes their PCPs especially important for isotopologue separation is that the linkers flip when moderately heated. This flipping action acts like a gate, allowing molecules to pass from one ‘cage’ in the PCP to another. Movement is blocked when the material is cooled.

When the scientists exposed their ‘flip-flop dynamic crystals’ to vapour containing a mixture of normal, heavy and semi-heavy water and then slightly warmed it, they adsorbed normal water much faster than they did the other two isotopologues. Crucially, this process happened within room temperature ranges.

“The adsorptive separation of water isotopologues in our work is substantially superior to conventional methods due to very high selectivity at room temperature operation,” says Kitagawa. “We are optimistic that new materials guided by our work will be developed to separate other isotopologues.”

About Kyoto University’s Institute for Integrated Cell-Material Sciences (iCeMS):
At iCeMS, our mission is to explore the secrets of life by creating compounds to control cells, and further down the road to create life-inspired materials.