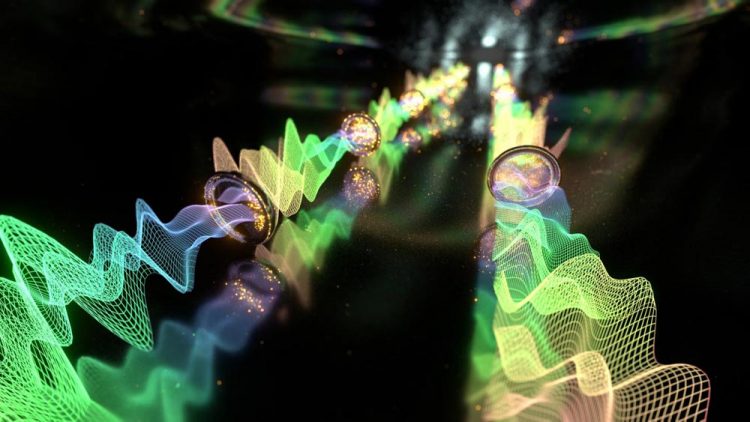 Sound waves can travel across a complex medium with no distortion. Credit: @Jamani Caillet / EPFL

For an example, you need look no further than your smartphone – the geolocation function works less well inside buildings where radiofrequency waves scatter in all directions. Other potential applications include biomedical imaging and geological surveying, where it's important to be able to send waves across highly disordered media.

A team of researchers from two labs at EPFL's School of Engineering, working in association with TU Wien and the University of Crete, has developed a system that allows sound waves to travel across such media with no distortion. It uses tiny speakers as acoustic relays to offset the wave scattering, and has been successfully tested on a real acoustic system. Their work has just been published in Nature Physics.

In the researchers' system, the tiny speakers can be controlled to amplify, attenuate or shift the phase of the sound waves. That lets them offset the diffusion that results when the waves hit obstacles, and thereby reproduce the original sound exactly on the other side of the disordered medium.

How does it work? “We realized that our acoustic relays had to be able to change the waves' amplitudes and phases at strategic locations, to either magnify or attenuate them,” says Romain Fleury, head of EPFL's Laboratory of Wave Engineering (LWE) and a co-author of the study.

The researchers tested their system by building an air-filled tube and placing various kinds of obstacles such as walls, porous materials and chicanes into it, in order to create a highly disordered medium through which no sound waves could pass. They then placed their tiny speakers between the obstacles and set up electronic controls to adjust the speakers' acoustic properties.

“We've been working on using controlled speakers as active sound absorbers for years, so it made sense to use them for this new application too,” says Hervé Lissek, head of the acoustics research group at EPFL's Signal Processing Laboratory 2 (LTS2) and a co-author of the study.

“Until now, we only needed to attenuate sound waves. But here we had to develop a new control mechanism so we could also amplify them, like how we can already amplify optical waves with lasers,” adds Etienne Rivet, another co-author at EPFL who wrote a thesis on the subject. Their new method – the only one of its kind in acoustics – uses programmable circuits to control several speakers simultaneously and in real time.

The researchers' method for active acoustic control is similar to that used in noise cancelling headphones and could potentially be used for sounds containing common ambient frequencies. It could also be used to eliminate the waves that bounce off objects like submarines, making them undetectable by sonar. Moreover, the theory underlying their work is universal and could have parallel applications in optics or radiofrequencies, to make objects invisible or to take images through opaque materials.