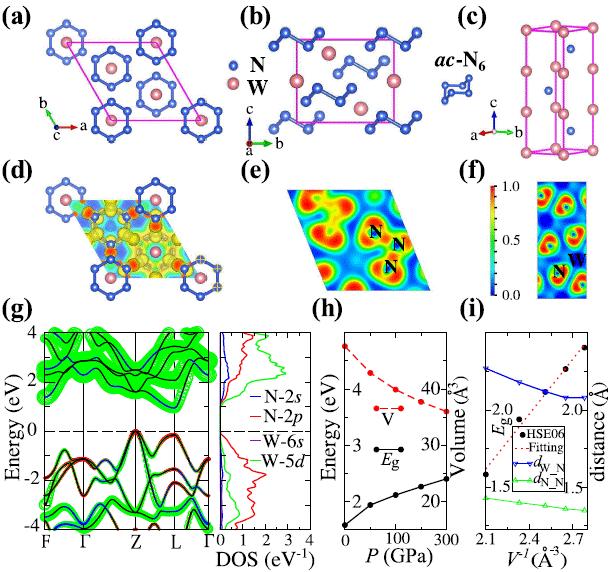 The energy bands contributed by d valence electrons of tungsten atoms can easily cross the fermi energy level, and the metallicity leads to great reduction of their hardness. Therefore, designing non-metallic tungsten nitride crystal structures seems be a promising way to reach outstanding mechanical properties, such as superhardness.

It has a sandwich-like structure, formed by nitrogen armchair-like six-membered ring and tungsten atoms. The electron localization function and Bader charge analysis indicate that h-WN6 is an ionic crystal containing strong N-N covalent bonds. It can be stable at high pressures and metastable at ambient pressure.

Moreover, it has a small indirect energy-gap and abnormal gap broadening behavior under compression. (see the crystal structure, electronic structures and the high pressure behaviors in the attached Figure) More interestingly, h-WN6 is estimated to be the hardest among transition metal nitrides known so far, with a Vickers hardness around 57 GPa and also has a pretty high melting temperature of around 1,900 K. Moreover, their calculations also show that this nitrogen-rich compound can be considered as a potential high-energy-density material because of the good gravimetric (3.1 kJ/g) and volumetric (28.0 kJ/cm3) energy densities.

Their work developed a machine learning accelerated crystal structure search method, summarized the designing rules of superhard transition metal light elements compounds, and predicted a superhard and high-energy-density tungsten nitride with good thermal stability. It will stimulate the theoretical design and experimental synthesis of this kind of transition metal materials with potential application value. This will also enrich the family of superhard materials and may be used a reference for understanding the origin of hardness.