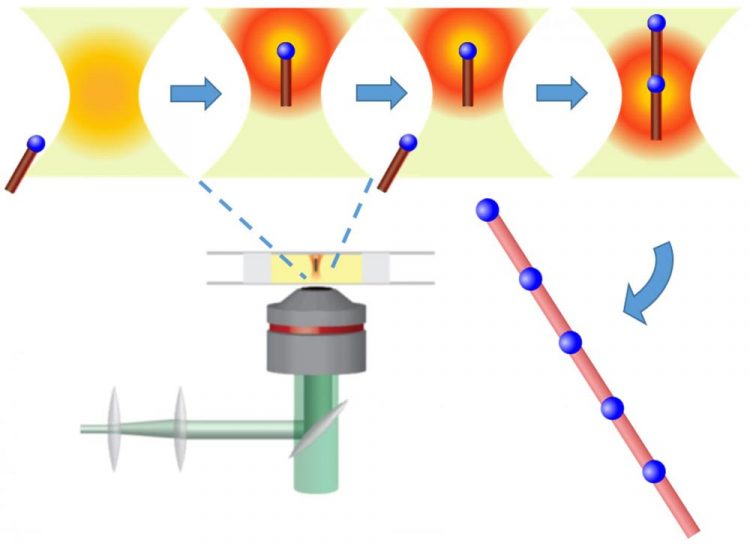 Focused laser light generates an optical "tractor beam," which can manipulate and orient semiconductor nanorods (red) with metal tips (blue) in an organic solvent solution. The energy from the laser superheats the metallic tip of the trapped nanorod, allowing the aligned nanorods to be welded together end-to-end in a solution-based "nanosoldering" process. Credit: Vincent Holmberg/Matthew Crane/Elena Pandres/Peter Pauzauskie

Now imagine construction at a smaller scale — less than 1/100th the thickness of a piece of paper. This is the nanoscale. It is the scale at which scientists are working to develop potentially groundbreaking technologies in fields like quantum computing.

It is also a scale where traditional fabrication methods simply will not work. Our standard tools, even miniaturized, are too bulky and too corrosive to reproducibly manufacture components at the nanoscale.

Researchers at the University of Washington have developed a method that could make reproducible manufacturing at the nanoscale possible. The team adapted a light-based technology employed widely in biology — known as optical traps or optical tweezers — to operate in a water-free liquid environment of carbon-rich organic solvents, thereby enabling new potential applications.

As the team reports in a paper published Oct. 30 in the journal Nature Communications, the optical tweezers act as a light-based “tractor beam” that can assemble nanoscale semiconductor materials precisely into larger structures. Unlike the tractor beams of science fiction, which grab spaceships, the team employs the optical tweezers to trap materials that are nearly one billion times shorter than a meter.

“This is a new approach to nanoscale manufacturing,” said co-senior author Peter Pauzauskie, a UW associate professor of materials science and engineering, faculty member at the Molecular Engineering & Sciences Institute and the Institute for Nano-engineered Systems, and a senior scientist at the Pacific Northwest National Laboratory.

“There are no chamber surfaces involved in the manufacturing process, which minimizes the formation of strain or other defects. All of the components are suspended in solution, and we can control the size and shape of the nanostructure as it is assembled piece by piece.”

“Using this technique in an organic solvent allows us to work with components that would otherwise degrade or corrode on contact with water or air,” said co-senior author Vincent Holmberg, a UW assistant professor of chemical engineering and faculty member in the Clean Energy Institute and the Molecular Engineering & Sciences Institute. “Organic solvents also help us to superheat the material we're working with, allowing us to control material transformations and drive chemistry.”

To demonstrate the potential of this approach, the researchers used the optical tweezers to build a novel nanowire heterostructure, which is a nanowire consisting of distinct sections comprised of different materials. The starting materials for the nanowire heterostructure were shorter “nanorods” of crystalline germanium, each just a few hundred nanometers long and tens of nanometers in diameter — or about 5,000 times thinner than a human hair. Each is capped with a metallic bismuth nanocrystal.

The researchers then used the light-based “tractor beam” to grab one of the germanium nanorods. Energy from the beam also superheats the nanorod, melting the bismuth cap. They then guide a second nanorod into the “tractor beam” and — thanks to the molten bismuth cap at the end — solder them end-to-end. The researchers could then repeat the process until they had assembled a patterned nanowire heterostructure with repeating semiconductor-metal junctions that was five-to-ten times longer than the individual building blocks.

Nanowires that contain junctions between materials — such as the germanium-bismuth junctions synthesized by the UW team — may eventually be a route to creating topological qubits for applications in quantum computing.

The tractor beam is actually a highly focused laser that creates a type of optical trap, a Nobel Prize-winning method pioneered by Arthur Ashkin in the 1970s. To date, optical traps have been used almost exclusively in water- or vacuum-based environments. Pauzauskie's and Holmberg's teams adapted optical trapping to work in the more volatile environment of organic solvents.

“Generating a stable optical trap in any type of environment is a delicate balancing act of forces, and we were lucky to have two very talented graduate students working together on this project,” said Holmberg.

The photons that make up the laser beam generate a force on objects in the immediate vicinity of the optical trap. The researchers can adjust the laser's properties so that the force generated can either trap or release an object, be it a single germanium nanorod or a longer nanowire.

“This is the kind of precision needed for reliable, reproducible nanofabrication methods, without chaotic interactions with other surfaces or materials that can introduce defects or strain into nanomaterials,” said Pauzauskie.

The researchers believe that their nanosoldering approach could enable additive manufacturing of nanoscale structures with different sets of materials for other applications.

“We hope that this demonstration results in researchers using optical trapping for the manipulation and assembly of a wider set of nanoscale materials, irrespective of whether or not those materials happen to be compatible with water,” said Holmberg.

Co-lead authors on the paper are Elena Pandres, a UW graduate student in chemical engineering, and Matthew Crane, a UW doctoral graduate and current postdoctoral researcher in the UW Department of Chemistry. Co-author is E. James Davis, a UW professor emeritus of chemical engineering. The research was funded by the National Science Foundation, the UW Molecular Engineering Materials Center, the UW Molecular Engineering & Sciences Institute, the UW Institute for Nano-engineered Systems, the UW Clean Energy Institute, the State of Washington, the Washington Research Foundation and the Air Force Office of Scientific Research.

For more information, contact Pauzauskie at peterpz@uw.edu and Holmberg at holmvc@uw.edu.