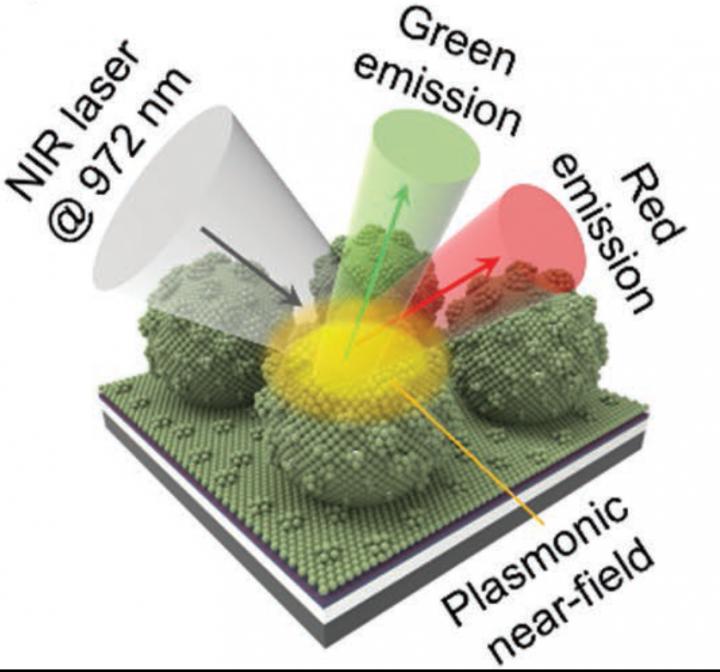 This is the 3D conceptual illustration of the luminescent film. Credit: Korea Institute of Science and Technology (KIST)

Infrared radiation, which is invisible yet highly utilizable, is used in various fields and for various purposes, such as for coronavirus detection (i.e. through thermal imaging cameras and biosensors). A Korean research team has developed a technology that visualizes infrared radiation and expands its application range.

The Korea Institute of Science and Technology (KIST, Acting President Yoon Seok-jin) announced that Dr. Kwon Seok-joon's research team at the Nanophotonics Research Center has developed a multi-functional luminescent film that can visualize near-infrared light through *wavelength conversion that converts near-infrared light to visible light. The research was jointly conducted by the KIST team and Ko Doo-hyun, a professor of applied chemistry at Kyung Hee University (President Han Gyun-tae).

***Photon: A type of elementary particle or quantum that comprises all electromagnetic waves including visible lights. It also acts as a carrier of electromagnetic forces.

The research team at KIST made a square lattice array of oxidized silicon (silica) microbeads decorated with up-conversion nanoparticles and metal structures. This configuration maximizes both the absorption of near-infrared light and the luminescence of visible light, thus increasing the efficiency of near-infrared-to-visible light conversion by nearly 1,000 times.

The lattice configuration of silica microbeads developed by the research team can easily be transferred to a transparent film. This type of film was found to be flexible, foldable, and even washable with the light intensity maintained after wavelength conversion.

“Existing infrared sensors can only collect one type of data, but this technology can be used to collect various types of data all at once and visualize them,” said Dr. Kwon Seok-joon from KIST, who led the research. “Since this technology has various advantages in processing, such as foldability, washability, and transferability into other films, its application can be extended throughout various fields, and it can be used for foldable devices, wearable sensors, and flexible wavelength conversion imaging devices.”

The research, backed by Korea's Ministry of Science and ICT (Minister Choi Ki-young), was conducted as one of KIST's key projects and also through the Young Fellow Project; the Future Promising Conversion Technology Pioneer Project of the National Research Foundation of Korea; and the Energy Technology Development Project of the Ministry of Trade, Industry and Energy (Minister Sung Yun-mo). An article explaining the results of the research was published in the latest issue of Advanced Functional Materials, a renowned international journal on material engineering (IF: 15.62, top 3.04% of JCR).