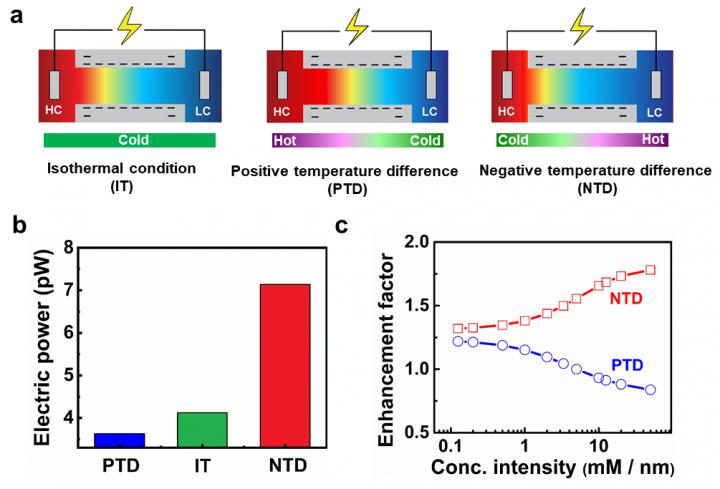 Previous efforts focusing on the nanofluidic energy conversion system mainly deal with the isothermal conditions. Conventional viewpoint suggests that improving the membrane potential requires a larger temperature and a long channel length to guarantee a large selectivity and a high effective concentration difference.

This intuitive judgement accounts for increasing temperature to achieve better performance. However, the transmembrane temperature difference is a very important, yet long-overlooked element that impacts the performance of the nanofuidic devices.

In a new research article published in the Beijing-based National Science Review, scientists at Huazhong University of Science and Technology, China present an anomalous temperature dependence in nanofluidic power generation.

A negative temperature difference can significantly improve the membrane potential due to the impact of ionic thermal up-diffusion that promotes the selectivity and suppresses the ion concentration polarization, especially at the low concentration side, which results in dramatically enhanced electric power. Simple and efficient ways are also proposed to fabricate tunable ionic voltage sources and enhance salinity gradient energy conversion based on small nanoscale biochannels and mimetic nanochannels.

This research received funding from the National Natural Science Foundation of China.