How to design efficient materials for OLED displays 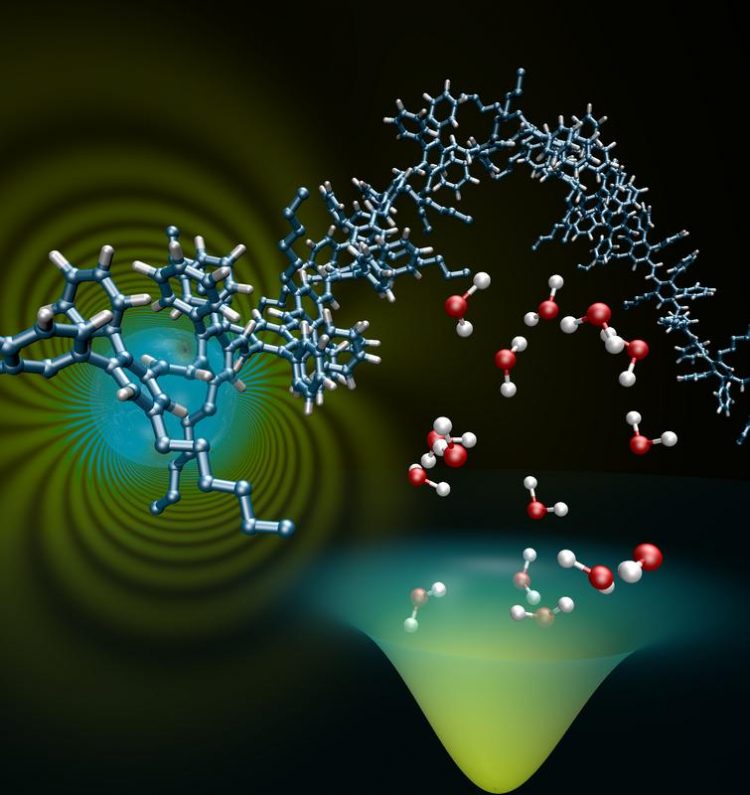 Charges in organic semiconductors can be trapped by either oxygen or water molecules © D. Andrienko, MPI-P

The basic principle of the first light bulb, invented by Thomas Edison in the 19th century, was quite simple: Electrons – negatively charged particles – flow through a carbon filament and create light by converting their energy to light and heat.

Nowadays, the physics of the generation of light in semiconducting devices is more complex: Electrons flow through a device and release their energy at a given point in the device. For this, they have to find a free place, i. e. a place that isn’t occupied by an electron – at a deeper lying energy level.

This free place can be viewed as a sort of positive charge, a so called hole. If the electron jumps down into the hole, its energy is released in the form of light. Based on this principle, an organic light-emitting diode (OLED) converts electric current into light.

“In our newest experiments, we examined a large range of organic semiconductors and found out the main parameters that are essential for equal and defect-free conduction of both holes and electrons”, says Gert-Jan Wetzelaer (Department of Prof. Paul Blom). In a semiconductor, electrons are moving at a higher energy level, whereas holes move at a level lower (deeper) in energy.

“We found that these clusters of water molecules can function as a hole trap, leading to electron-dominated organic semiconductors. By contrast, for hole-dominated semiconductors, oxygen related defects capture electrons. As a result, we could show that highly unipolar charge transport for either holes or electrons is governed by a very small amount of defects, such as water and oxygen.” Unfortunately, removing such defects completely has proven challenging.

Therefore, the Mainz researchers are able to define how to design highly efficient organic semiconductors in the future: The different energy levels of the material should be in a certain range, which strongly reduces the influence of oxygen and water molecules that are the main cause for charge trapping. Based on this concept, the first highly efficient OLEDs with defect-free electrical conduction have recently been realized.

The results have now been published in the renowned journal “Nature Materials.”