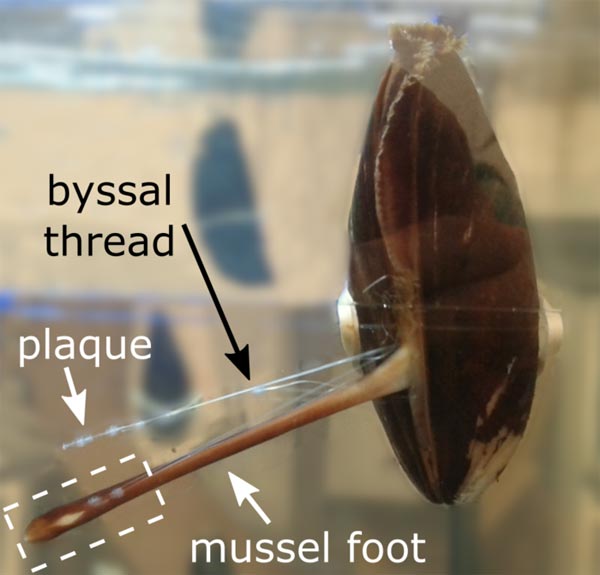 The mussels’ beards (which cooks remove before preparing them) are made up of byssal threads and are used to help keep the mussels tethered in place. At the end of each thread is a disc-shaped plaque that acts as an underwater glue. The unusual qualities of the glue and the byssal threads have interested people since ancient times, when the threads of certain species were woven into luxurious berets, purses, gloves, and stockings. More recently, scientists have developed underwater adhesives and surgical glues inspired by byssal thread chemistry. The identification of the mechanisms involved in creating the glue should advance work in this field.
Credit: Tobias Priemel

Discovery could advance production of high-performance next generation adhesives and plastics.

Blue mussels (Mytilus edulis) spend their days being buffeted by crashing waves. They manage to stay tethered to the rocks or their fellow mussels thanks to a highly effective underwater glue they produce.  Because achieving adhesion in the presence of water is so challenging, scientists who are interested in producing effective adhesives for use in wet environments (e.g., for surgical or dental treatments) have turned to mussels for inspiration. In a paper published today in Science, a McGill led international research team reports that, after a decade of work in the area, it has succeeded in uncovering the cellular mechanisms by which mussels fabricate underwater adhesives.

“The specific mechanism by which mussels produce their adhesive has been shrouded in mystery until now because everything occurs hidden from view inside the mussel foot,” says Tobias Priemel, the first author on the paper, a PhD student in the Harrington Lab, who has been working on this research for the past seven years, originally as a MSc student in Germany. “To understand the mechanisms involved we applied advanced spectroscopic and microscopic techniques and developed an experimental approach that combined several advanced and basic methodologies from across biochemistry, chemistry, and materials science.”

By gathering information at a subcellular level, the researchers discovered that within the mussel foot, there are micron-sized channels (ranging in diameter from 1/10 to the full width of a human hair) which funnel the substances that come together to make the glue. Condensed fluid proteins in tiny sacs (vesicles) are secreted into the channels where they mix with metal ions (iron and vanadium, taken up from seawater). The metal ions, which are also stored in small vesicles, are slowly released in a carefully timed process, eventually curing (or hardening) the fluid protein into a solid glue.

The accumulation and use of vanadium is especially interesting, since only a few other organisms are known to hyperaccumulate vanadium. The researchers believe that it plays an important role in hardening the glue and are continuing to work in this area.

“Mussels can make their underwater adhesive within 2-3 minutes by mixing metal ions with the fluid proteins,” explains Matthew Harrington, an associate professor in McGill’s Chemistry Department and the senior author on the paper. “It’s a matter of bringing together the right ingredients, under the right conditions using the right timing. The more we understand about the process, the better engineers will later be able to adapt these concepts for manufacturing bio-inspired materials.”

Founded in Montreal, Quebec, in 1821, McGill University is Canada’s top ranked medical doctoral university. McGill is consistently ranked as one of the top universities, both nationally and internationally. It is a world-renowned institution of higher learning with research activities spanning three campuses, 11 faculties, 13 professional schools, 300 programs of study and over 40,000 students, including more than 10,200 graduate students. McGill attracts students from over 150 countries around the world, its 12,800 international students making up 31% of the student body. Over half of McGill students claim a first language other than English, including approximately 19% of our students who say French is their mother tongue.