Hidden talents: Converting heat into electricity with pencil and paper 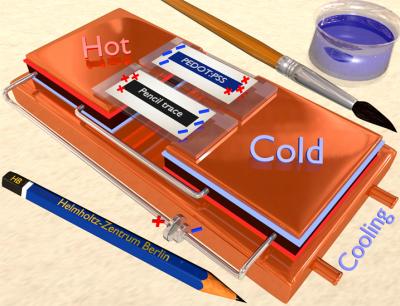 This is a sketch of the experiment. Credit: HZB

Unfortunately, as useful an effect as it is, it is extremely small in ordinary metals. This is because metals not only have high electrical conductivity, but high thermal conductivity as well, so that differences in temperature disappear immediately. Thermoelectric materials need to have low thermal conductivity despite their high electrical conductivity. Thermoelectric devices made of inorganic semiconductor materials such as bismuth telluride are already being used today in certain technological applications. However, such material systems are expensive and their use only pays off in certain situations. Flexible, non-toxic, organic materials based on carbon nanostructures, for example, are also being investigated for use in the human body.

A team led by Prof. Norbert Nickel at the HZB has now shown that the effect can be obtained much more simply: using a normal HB-grade pencil, they covered over a small area in pencil on ordinary photocopy paper. As a second material, they applied a transparent, conductive co-polymer paint (PEDOT: PSS) onto the surface.

What transpires is that the pencil traces on the paper deliver a voltage comparable to other far more expensive nanocomposites that are currently used for flexible thermoelectric elements. And this voltage could be increased tenfold by adding some indium selenide to the graphite from the pencil.

The researchers investigated graphite and co-polymer coating films using a scanning electron microscope and spectroscopic methods (Raman scattering) at HZB. “The results were very surprising for us as well,” explains Nickel. “But we have now found an explanation of why this works so well: the pencil deposit left on the paper forms a surface characterised by unordered graphite flakes, some graphene, and clay. While this only slightly reduces the electrical conductivity, heat is transported much less effectively.”

These simple constituents might be able to be used in the future to print thermoelectric components onto paper that are extremely inexpensive, environmentally friendly, and non-toxic. Such tiny and flexible components could also be used directly on the body and could use body heat to operate small devices or sensors.