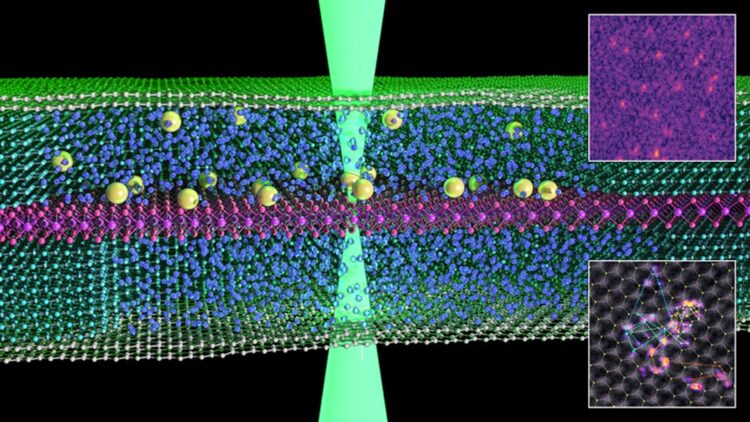 Atoms swimming in liquid thanks to graphene
Credit: The University of Manchester

Publishing in the journal, Nature, the team led by researchers based at the National Graphene Institute (NGI) used stacks of 2D materials like graphene to trap liquid in order to further understand how the presence of liquid changes the behaviour of the solid.

The team were able to capture images of single atoms ‘swimming’ in liquid for the first time. The findings could have widespread impact on the future development of green technologies such as hydrogen production.

When a solid surface is in contact with a liquid, both substances change their configuration in response to the proximity of the other. Such atomic scale interactions at solid-liquid interfaces govern the behaviour of batteries and fuel cells for clean electricity generation, as well as determining the efficiency of clean water generation and underpinning many biological processes.

One of the lead researchers, Professor Sarah Haigh, commented: “Given the widespread industrial and scientific importance of such behaviour it is truly surprising how much we still have to learn about the fundamentals of how atoms behave on surfaces in contact with liquids. One of the reasons information is missing is the absence of techniques able to yield experimental data for solid-liquid interfaces.”

Transmission electron microscopy (TEM) is one of only few techniques that allows individual atoms to be seen and analysed. However, the TEM instrument requires a high vacuum environment, and the structure of materials changes in a vacuum. First author, Dr Nick Clark explained: “In our work we show that misleading information is provided if the atomic behaviour is studied in vacuum instead of using our liquid cells.”

Professor Roman Gorbachev has pioneered the stacking of 2D materials for electronics but here his group have used those same techniques to develop a ‘double graphene liquid cell’. A 2D layer of molybdenum disulphide was fully suspended in liquid and encapsulated by graphene windows. This novel design allowed them to provide precisely controlled liquid layers, enabling the unprecedented videos to be captured showing the single atoms ’swimming’ around surrounded by liquid.

By analysing how the atoms moved in the videos and comparing to theoretical insights provided by colleagues at Cambridge University, the researchers were able to understand the effect of the liquid on atomic behaviour. The liquid was found to speed up the motion of the atoms and also change their preferred resting sites with respect to the underlying solid.

The team studied a material that is promising for green hydrogen production but the experimental technology they have developed can be used for many different applications.

Dr Nick Clark said: “This is a milestone achievement and it is only the beginning – we are already looking to use this technique to support development of materials for sustainable chemical processing, needed to achieve the world’s net zero ambitions.”