Graphene crinkles can be used as 'molecular zippers' 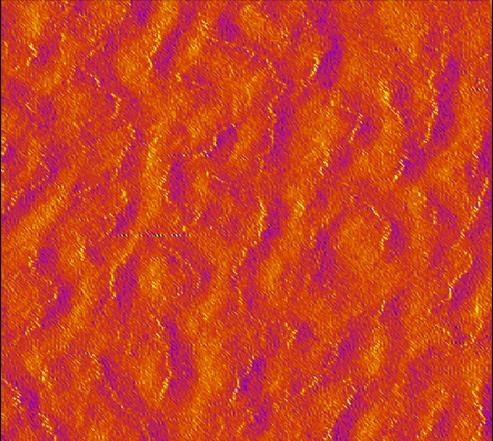 This is a microscope view of tiny buckyballs lined up on a layered graphene surface. New research shows that that electrically charged crinkles in the graphene surface are responsible for the strange phenomenon. Credit: Kim Lab / Brown University

Now, researchers from Brown University's School of Engineering have explained how the phenomenon works, and that explanation could pave the way for a new type of controlled molecular self-assembly.

In a paper published in Proceedings of the Royal Society A, the Brown team shows that tiny, electrically charged crinkles in graphene sheets can interact with molecules on the surface, arranging those molecules in electric fields along the paths of the crinkles.

“What we show is that crinkles can be used to create 'molecular zippers' that can hold molecules onto a graphene surface in linear arrays,” said Kyung-Suk Kim, director of the Center for Advanced Materials Research in Brown's Institute for Molecular and Nanoscale Innovation and the study's senior author.

“This linear arrangement is something that people in physics and chemistry really want because it makes molecules much easier to manipulate and study.”

The new paper is a follow-up to earlier research by Kim's team. In that first paper, they described how gently squeezing sheets of layered graphene from the side causes it to deform in a peculiar way. Rather than forming gently sloping wrinkles like you might find in a rug that's been scrunched against a wall, the compressed graphene forms pointy saw-tooth crinkles across the surface.

They form, Kim's research showed, because the arrangement of electrons in the graphene lattice causes the curvature of a wrinkle to localize along a sharp line. The crinkles are also electrically polarized, with crinkle peaks carrying a strong negative charge and valleys carrying a positive charge.

Kim and his team thought the electrical charges along the crinkles might explain the strange behavior of the buckyballs, partly because the type of multilayer graphene used in the original buckyball experiments was HOPG, a type of graphene that naturally forms crinkles when it's produced.

But the team needed to show definitely that the charge created by the crinkles could interact with external molecules on the graphene's surface. That's what the researchers were able to do in this new paper.

Their analysis using density functional theory, a quantum mechanical model of how electrons are arranged in a material, predicted that positively charged crinkle valleys should create an electrical polarization in the otherwise electrically neutral buckyballs.

That polarization should cause buckyballs to line up, each in the same orientation relative to each other and spaced around two nanometers apart.

Those theoretical predictions match closely the results of the original buckyball experiments as well as repeat experiments newly reported by Kim and his team.

The close agreement between theory and experiment helps confirm that graphene crinkles can indeed be used to direct molecular self-assembly, not only with buckyballs but potentially with other molecules as well.

Kim says that this molecular zippering capability could have many potential applications, particularly in studying biomolecules like DNA and RNA. For example, if DNA molecules can be stretched out linearly, it could be sequenced more quickly and easily. Kim and his team are currently working to see if this is possible.

“There's a lot of potential here to take advantage of crinkling and the interesting electrical properties they produce,” Kim said.

Kim's co-authors on the paper were Mrityunjay Kothari, Moon-Hyun Cha and Victor Lefevre. The work was supported by the National Science Foundation (CMMI-1462785 and 1563591).