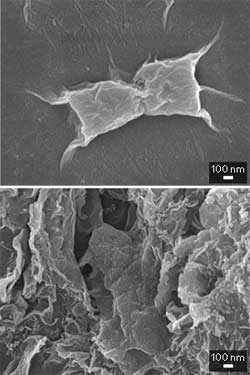 The discovery of graphene has brought much excitement to the nanotechnology community. Much of this excitement is due to the possibility of deriving graphene-based materials with applications in electronics, energy storage, sensing and biomedical devices. Despite the potential, however, there is a real concern that graphene-based materials may have deleterious effects on human health and the natural environment.

Interestingly, graphene oxide particles had the smallest size of all the four graphene materials as measured by dynamic light scattering. Wei and co-workers believe that particles of reduced graphene oxide were larger because they aggregated both laterally and in three dimensions.

In fact, the size of the particles could well be the key to why graphene oxide is so deadly to bacteria. When the researchers studied the affected cells using scanning electron microscopy, they saw that most of the E. coli cells were individually wrapped by layers of graphene oxide. In contrast, E. coli cells were usually embedded in the larger reduced-graphene-oxide aggregates (see image). A similar cell-trapping mechanism was operational in the graphite-based materials.

So why does cell-wrapping kill more cells than cell-trapping? The researchers believe that the direct contact of cell surface with graphene causes membrane stress and irreversible damage.

Wei and co-workers also investigated chemical mechanisms by which the materials could disrupt and kill bacteria. They found that the oxidation of glutathione, an important cellular antioxidant, occurred on exposure to graphite and reduced graphene oxide. “It might be that these structures act as conducting bridges extracting electrons from glutathione molecules and releasing them into the external environment,” says Wei.

Intriguingly, while the effect of the membrane-disrupting mechanisms dies away after four hours of incubation, the oxidation mechanism shows only minor changes.

“With the knowledge obtained in this study, we envision that physicochemical properties of graphene-based materials, such as the density of functional groups, size and conductivity can be better tailored to either reduce environmental risks or increase application potential,” says Wei.