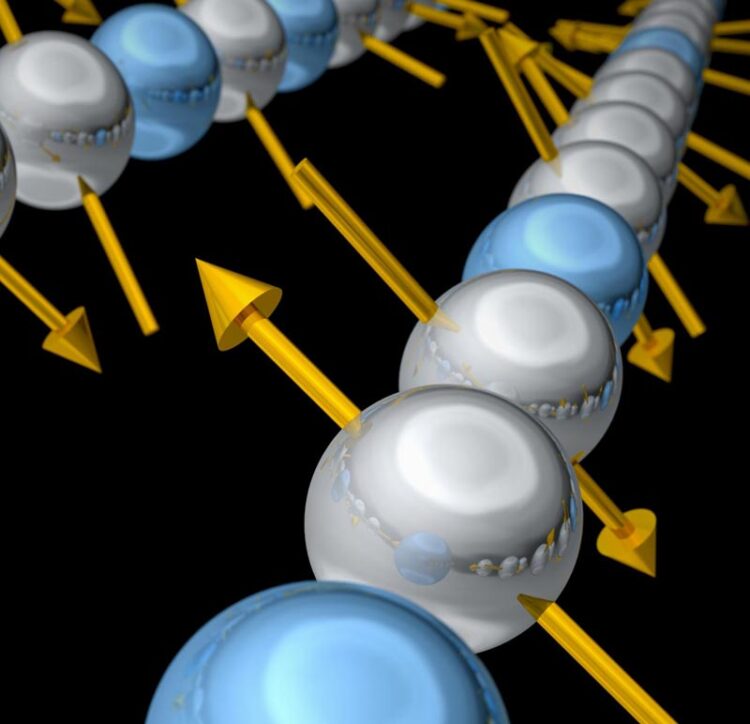 A new study found that nickelate superconductors, like their cousins the cuprates, are antiferromagnetic. Their electron spins - represented by gold arrows here - form a checkerboard pattern, so each down spin is surrounded by up spins and vice versa. The alternating spins cancel each other out, so the material as a whole is not magnetic in the ordinary sense. Researchers at SLAC, Stanford and Diamond Light Source discovered important similarities like this one as well as subtle differences between the two materials.
Credit: Greg Stewart/SLAC National Accelerator Laboratory

New nickelate materials give scientists an exciting new window into how unconventional superconductors carry electric current with no loss at relatively high temperatures.

Ever since the 1986 discovery that copper oxide materials, or cuprates, could carry electrical current with no loss at unexpectedly high temperatures, scientists have been looking for other unconventional superconductors that could operate even closer to room temperature. This would allow for a host of everyday applications that could transform society by making energy transmission more efficient, for instance.

Nickel oxides, or nickelates, seemed like a promising candidate. They’re based on nickel, which sits next to copper on the periodic table, and the two elements have some common characteristics. It was not unreasonable to think that superconductivity would be one of them.

But it took years of trying before scientists at the Department of Energy’s SLAC National Accelerator Laboratory and Stanford University finally created the first nickelate that showed clear signs of superconductivity.

Now SLAC, Stanford and Diamond Light Source researchers have made the first measurements of magnetic excitations that spread through the new material like ripples in a pond. The results reveal both important similarities and subtle differences between nickelates and cuprates. The scientists published their results in Science today.

“This is exciting, because it gives us a new angle for exploring how unconventional superconductors work, which is still an open question after 30-plus years of research,” said

Haiyu Lu, a Stanford graduate student who did the bulk of the research with Stanford postdoctoral researcher Matteo Rossi and SLAC staff scientist Wei-Sheng Lee.

“Among other things,” he said, “we want to understand the nature of the relationship between cuprates and nickelates: Are they just neighbors, waving hello and going about their separate ways, or more like cousins who share family traits and ways of doing things?”

The results of this study, he said, add to a growing body of evidence that their relationship is a close one.

Spins in a checkerboard

Cuprates and nickelates have similar structures, with their atoms arranged in a rigid lattice. Both come in thin, two-dimensional sheets that are layered with other elements, such as rare-earth ions. These thin sheets become superconducting when they’re cooled below a certain temperature and the density of their free-flowing electrons is adjusted in a process known as doping.

The first superconducting nickelate was discovered in 2019 at SLAC and Stanford. Last year, the same SLAC/Stanford team that performed this latest experiment published the first detailed study of the nickelate’s electronic behavior. That study established that in undoped nickelate, electrons flow freely in nickel oxide layers, but electrons from the intervening layers also contribute electrons to the flow. This creates a 3D metallic state that’s quite different from what is seen in cuprates, which are insulators when undoped.

Magnetism is also important in superconductivity. It’s created by the spins of a material’s electrons. When they’re all oriented in the same direction, either up or down, the material is magnetic in the sense that it could stick to the door of your fridge.

Cuprates, on the other hand, are antiferromagnetic: Their electron spins form a checkerboard pattern, so each down spin is surrounded by up spins and vice versa. The alternating spins cancel each other out, so the material as a whole is not magnetic in the ordinary sense.

Would nickelate have those same characteristics? To find out, researchers took samples of it to the Diamond Light Source synchrotron in the UK for examination with resonant inelastic X-ray scattering, or RIXS. In this technique, scientists scatter X-ray light off a sample of material. This injection of energy creates magnetic excitations – ripples that travel through the material and randomly flip the spins of some of its electrons. RIXS allows scientists to measure very weak excitations that couldn’t be observed otherwise.

“What we find is quite interesting,” Lee said. “The data show that nickelate has the same type of antiferromagnetic interaction that cuprates have. It also has a similar magnetic energy, which reflects the strength of the interactions between neighboring spins that keep this magnetic order in place. This implies that the same type of physics is important in both.”

But there are also differences, Rossi noted. Magnetic excitations don’t spread as far in nickelates, and die out more quickly. Doping also affects the two materials differently; the positively charged “holes” it creates are concentrated around nickel atoms in nickelates and around oxygen atoms in cuprates, and this affects how their electrons behave.

As this work continues, Rossi said, the team will test how doping the nickelate in various ways and swapping different rare earth elements into the layers between the nickel oxide sheets affect the material’s superconductivity ­- paving the way, they hope, to discovery of better superconductors.

Lu, Rossi, Lee and six other members of the research team are investigators with the Stanford Institute for Materials and Energy Sciences (SIMES) at SLAC, which received major funding from the DOE Office of Science. Researchers from the Lorentz Institute for Theoretical Physics at Leiden University in the Netherlands also contributed to this work.