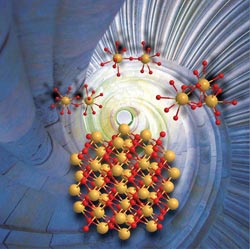 Ce(IV) dimers and trimers form in aqueous solution nanometer-sized cer dioxide crystals (CeO2). The size of the nanocrystals is in the order of two to three nanometers.<br>Picture: A. Ikeda-Ohno<br>

The research results were published in the scientific journal Chemistry – A European Journal (DOI: 10.1002/chem.201204101). This finding potentially simplifies and alleviates the existing synthetic processes of nanocrystalline CeO2 production.

Nanocrystalline CeO2 particles are widely used, for example, in catalysts for hazardous gas treatment, in electrodes for solid oxide fuel cells, in polishing materials for advanced integrated circuits, in sunscreen cosmetics, and in such medical applications as artificial superoxide dismutase. Current industrial syntheses of nanocrystalline CeO2 are based on sol-gel processes followed by thermal treatment and/or the addition of accelerant reagents. Any further improvement of the synthetic strategy for CeO2 nanocrystals requires a better understanding of the mechanisms involved in their formation at the atomic scale.

Dr. Atsushi Ikeda-Ohno from the University of New South Wales, Australia, together with Dr. Christoph Hennig from the HZDR opted for a sophisticated multi-spectroscopic approach that combines dynamic light scattering and synchrotron-based X-ray techniques. These complex investigations involved the use of two world-leading synchrotron facilities of the European Synchrotron Radiation Facility (ESRF) in Grenoble, France, and SPring-8 in Hyogo, Japan.

For the first time ever, the scientists were able to perform an in-situ observation of nanocrystal evolution. So far, little has been known of the formation mechanism of metal nanocrystals; mainly because appropriate analytical techniques were lacking. The most widely used techniques for metal nanocrystal research are electron microscopy and X-ray diffraction. They are powerful enough to visualize the appearance of nanocrystals and to acquire their lattice information, but they are not applicable to the solution state where the evolution of metal nanocrystals occurs. “To probe the formation of nanocrystalline CeO2 in an aqueous solution, we combined different spectroscopic techniques, including dynamic light scattering, synchrotron X-ray absorption spectroscopy, and high energy X-ray scattering,” says Dr. Atsushi Ikeda-Ohno.

The information the researchers obtained is fundamental to simplifying and alleviating the synthetic process of CeO2 nanocrystals. They revealed that uniformly sized nanoparticles of CeO2 can be produced simply by pH adjustment of tetravalent cerium (Ce(IV)) in an aqueous solution without subsequent physical/chemical treatment such as heating or adding accelerant chemicals. The produced CeO2 crystals have a uniform particle size of 2 – 3 nanometers, irrespective of the preparation conditions (e.g. pH and type of pH adjustment). This particle size is exactly in the range which is interesting for industrial applications. A key finding is that mononuclear Ce(IV) solution species do not result in nano-sized CeO2 crystals. The prerequisite is the presence of oligomeric Ce(IV) solution species, such as dimers or trimers.

The Helmholtz-Zentrum Dresden-Rossendorf (HZDR) conducts research in the sectors energy, health, and matter. It focuses its research on the following topics:

• How can energy and resources be used efficiently, safely, and sustainably?
• How can malignant tumors be visualized and characterized more precisely and treated effectively?
• How do matter and materials behave in strong fields and at the smallest dimensions?

The HZDR has been a member of the Helmholtz Association, Germany’s largest research organization, since 2011. It has four locations in Dresden, Leipzig, Freiberg, and Grenoble and employs about 1,000 people – approx. 450 of whom are scientists including 160 doctoral candidates.