Home / Materials Sciences / Capturing the coordinated dance between electrons and nuclei in a light-excited molecule
22.05.2020 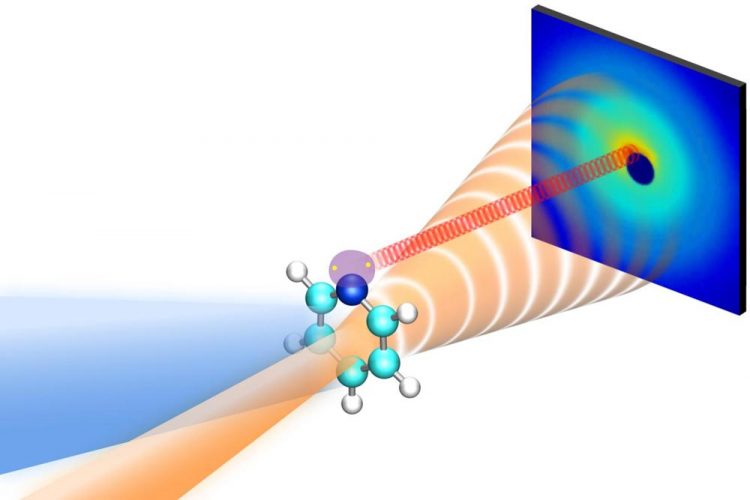 A new study shows that electrons scattering off pyridine molecules in two different ways, as shown by the striped orange cone and the red coil, could be separated, allowing researchers to simultaneously observe how the molecule's nuclei and electrons respond to flashes of light. The study was done with SLAC's "electron camera," MeV-UED. Credit: Greg Stewart/SLAC National Accelerator Laboratory

Using a high-speed “electron camera” at the Department of Energy's SLAC National Accelerator Laboratory, scientists have simultaneously captured the movements of electrons and nuclei in a molecule after it was excited with light. This marks the first time this has been done with ultrafast electron diffraction, which scatters a powerful beam of electrons off materials to pick up tiny molecular motions.

“In this research, we show that with ultrafast electron diffraction, it's possible to follow electronic and nuclear changes while naturally disentangling the two components,” says Todd Martinez, a Stanford chemistry professor and Stanford PULSE Institute researcher involved in the experiment. “This is the first time that we've been able to directly see both the detailed positions of the atoms and the electronic information at the same time.”

The technique could allow researchers to get a more accurate picture of how molecules behave while measuring aspects of electronic behaviors that are at the heart of quantum chemistry simulations, providing a new foundation for future theoretical and computational methods. The team published their findings today in Science.

In previous research, SLAC's instrument for ultrafast electron diffraction, MeV-UED, allowed researchers to create high-definition “movies” of molecules at a crossroads and structural changes that occur when ring-shaped molecules break open in response to light. But until now, the instrument was not sensitive to electronic changes in molecules.

“In the past, we were able to track atomic motions as they happened,” says lead author Jie Yang, a scientist at SLAC's Accelerator Directorate and the Stanford PULSE Institute. “But if you look closer, you'll see that the nuclei and electrons that make up atoms also have specific roles to play. The nuclei make up the skeleton of the molecule while the electrons are the glue that holds the skeleton together.”

In these experiments, a team led by researchers from SLAC and Stanford University was studying pyridine, which belongs to a class of ring-shaped molecules that are central to light-driven processes such as UV-induced DNA damage and repair, photosynthesis and solar energy conversion. Because molecules absorb light almost instantaneously, these reactions are extremely fast and difficult to study. Ultra-high-speed cameras like MeV-UED can “freeze” motions occurring within femtoseconds, or millionths of a billionth of a second, to allow researchers to follow changes as they occur.

First, the researchers flashed laser light into a gas of pyridine molecules. Next, they blasted the excited molecules with a short pulse of high-energy electrons, generating snapshots of their rapidly rearranging electrons and atomic nuclei that can be strung together into a stop-motion movie of the light-induced structural changes in the sample.

The team found that elastic scattering signals, produced when electrons diffract off a pyridine molecule without absorbing energy, encoded information about the nuclear behavior of the molecules, while inelastic scattering signals, produced when electrons exchange energy with the molecule, contained information about electronic changes. Electrons from these two types of scattering emerged at different angles, allowing researchers to cleanly separate the two signals and directly observe what the molecule's electrons and nuclei were doing at the same time.

“Both of these observations agree almost precisely with a simulation that is designed to take into account all possible reaction channels,” says co-author Xiaolei Zhu, who was a postdoctoral fellow at Stanford at the time of this experiment. “This provides us with an exceptionally clear view of the interplay between electronic and nuclear changes.”

The scientists believe this method will supplement the range of structural information collected through X-ray diffraction and other techniques at instruments such as SLAC's Linac Coherent Light Source (LCLS) X-ray laser, which is able to measure precise details of the chemical dynamics on the shortest timescales, as recently reported for another light-induced chemical reaction.

“We're seeing that MeV-UED is becoming more and more of a tool that complements other techniques,” says co-author and SLAC scientist Thomas Wolf. “The fact that we can get electronic and nuclear structures in the same data set, measured together yet observed separately, will provide new opportunities to combine what we learn with knowledge from other experiments.”

'A new way of looking at things'

In the future, this technique could allow scientists to follow ultrafast photochemical processes where the timing of electronic and nuclear changes is crucial to the outcome of the reaction.

“This really opens up a new way of looking at things with ultrafast electron diffraction,” says co-author Xijie Wang, director of the MeV-UED instrument. “We're always trying to find out how the electrons and the nuclei actually interact to make these processes so fast. This technique allows us to distinguish which comes first – the change to the electrons or the change in the nuclei. Once you get a complete picture of how these changes play out, you can start to predict and control photochemical reactions.”