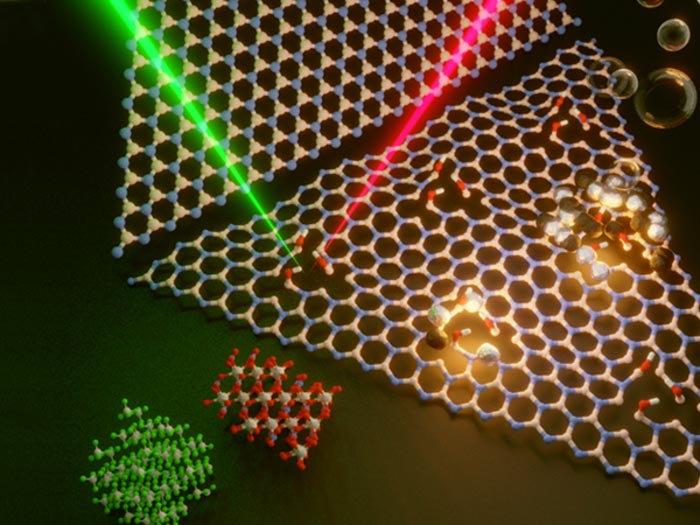 Defects in the lattice structure of hexagonal boron nitride can be detected with photoluminescence. Researchers shine a light with a color or energy on the material and get a different color from the defect. In addition, the figure shows hydrogen bubbles being generated from these defects that contain catalyst atoms (gray and dark spheres attached to the vacancies).
Credit: Elizabeth Flores-Gomez Murray, Yu Lei and Kazunori Fujisawa, Penn State

Demonstrating that a material thought to be always chemically inert, hexagonal boron nitride (hBN), can be turned chemically active holds potential for a new class of catalysts with a wide range of applications, according to an international team of researchers.

hBN is a layered material and monolayers can be exfoliated like in graphene, another two-dimensional material. However, there is a key difference between the two.

“While hBN shares similar structure as graphene, the strong polar bonds between the boron and nitride atoms makes hBN unlike graphene in that it is chemically inert and thermally stable at high temperature,” said Yu Lei, postdoctoral scholar in physics at Penn State and first co-author in the study published in Materials Today.

If hBN was chemically active and not inert, that would enable more uses for it, including being a useful, cost-efficient catalyst support similar to graphene. This would be useful for practical applications like in a gasoline-powered automobile or to convert carbon for helping reduce greenhouse gases to other products.

“The catalytic converter in your gasoline car has the precious metal platinum in it to process the conversion of harmful gases into less harmful gases,” said Jose Mendoza-Cortes, assistant professor of chemical engineering and materials science at Michigan State University. “However, this is expensive because you need to put in a lot of platinum atoms for the catalysis. Now imagine that you only need to put one or two, and still get the same performance.”

Platinum is also used as a catalyst for many other types of practical chemical reactions, and the platinum atoms that perform the conversion are usually on the surface, while the ones below are just there as structural support.

“In this study, we have used defective hBN as structural support, which is cheaper, while exposing most of the platinum atom for performing chemical reactions,” Mendoza-Cortes said.

The defects in the hBN are the key to the material’s chemical activity. The researchers made defects, tiny holes, in the materials via a process called cryomilling, which involves supercooling a material and then reducing it via cryogenic grinding.

The holes are so small that they can hold only one or two atoms of a precious metal at a time. By mixing a metal salt, nanostructures as small as an atom or two onto the hBN substrate can be deposited, due to the reactivity of the hole-filled hBN.

“Since boron nitride doesn’t react with anything, then you can use this “holey” hBN as a support for catalysts if you reduce a platinum, gold or silver salt into single atoms and place them in defects (holes) on the boron nitride surface,” said Maurico Terrones, Verne M. Willaman Professor of physics and professor of chemistry and materials science at Penn State. “This is something entirely new, and that’s what we demonstrated here.”

Demonstrating this was significant, as it was previously believed that a material that is so inert could never become chemically active.

“The most difficult part of this project was to convince the research community that material that is as inert as hBN can be activated to have chemical reactivity, and serve as the catalyst support,” Lei said. “During the process of reviewing our study, additional experiments that were suggested by the reviewers improved the work and help to convince the community.”

The experiments involved the use of high-end equipment in the Materials Characterization Lab (MCL), part of the Materials Research Institute at Penn State. The computational and theoretical calculations were done at the Materials, Processes and Quantum Simulation Center (MUSiC) Lab and the Institute for Cyber-Enabled Research at Michigan State University.

“So, we wanted to know what type of defects we had in the material, and how can we demonstrate that we have the defects and it’s not something else?” Terrones said. “So, we did all these various very detailed characterizations, including synchrotron radiation, to demonstrate that what we had was in fact single-atom platinum, and not platinum clusters.”

Beyond experiments, the team also used modeling to prove their concept.

“We showed and proved computationally and experimentally that we can make holes so small that they can hold only 1-, or 2-atoms of precious metals at the time,” Mendoza-Cortes said.

The potential for applications for chemically active hBN is varied, including more cost-effective catalysts, energy storage and sensors. In addition, there is potential that their technique could be used for activating other inert materials or using other (precious) metals.

“I think we are showing that material that is supposed to be inert can be activated by creating and controlling defects on the material,” Terrones said. “We demonstrated that the necessary chemistry happens at the atomic level. If it works for boron nitride, it should work for any other material.”

The study was partially supported by the National Science Foundation. This work was supported in part through computational resources and services provided by the Institute for Cyber-Enabled Research at Michigan State University.