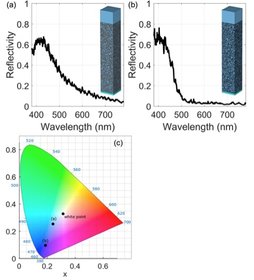 In contrast to conventional pigments, the color effect is not caused by the absorption of certain wavelengths, which are in turn missing from the reflection spectrum and thus cause the color impression. Structural colors generate color solely by a structure that lets certain wavelengths destructively interfere.

Often such pigments feature a color impression that is dependent on the direction of illumination as well as the angle under which the pigment is looked at. This one wants to prevent in many cases. To realize “non-iridescent” colors, a certain amount of disorder in the structural arrangement of the colorant is needed. However, this disorder has lead, so far, to only weakly saturated colors.

The group of Hamburg based scientist have managed now to resolve these conflicting requirements. For this purpose a new concept was developed, which is based on weakly ordered arrangements of spheres – a so called photonic glass – combined with a precise design of the spheres themselves.

The utilized hollow spheres have a diameter of around 200 nanometers with a ceramic shell of only around 10 nanometers thickness. Only the combination of the nearest neighbor ordering of these densely packed spheres and the hollow sphere character of the single particles allow a steep edge of the reflection spectrum (Figure 1b). The usefulness of this design approach is exemplified with a highly saturated blue color.

The photonic glass from hollow sphere particles produces a blue color much closer to the perimeter of the chromaticity diagram, thus a much purer color than that of the photonic glass from homogeneously filled spheres (Figure 1c). The team of researchers developed the theoretical framework for the description of this novel class of colorants and confirmed their predictions with extensive numerical simulations.

These principal findings which were produced under the lead of the scientists from Hamburg are further of importance for the development of non-toxic colorants, which also do not bleach under sun light and which are suited for high processing temperatures beyond 1000°C.

The manuscript was published in Scientific Reports, an Open Access-Journal of Nature.