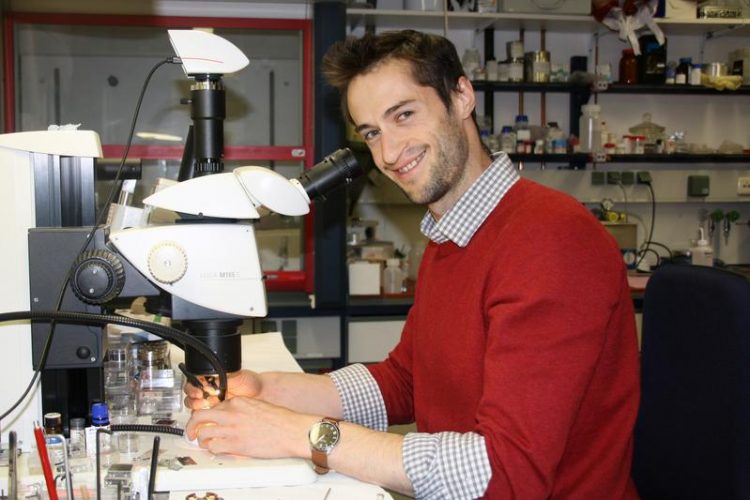 The Bayreuth team, led by Dr. Dominique Laniel, has stored a mixture of metallic magnesium (Mg) and nitrogen (N₂) in a diamond anvil cell. They then subjected the mixture to a temperature of 2,000 Kelvin (more than 1,700 degrees Celsius) and a pressure of 50 Gigapascal, pressure corresponding to 500,000 times the pressure of the Earth's atmosphere.

Under the extreme pressure and temperature conditions, very unusual crystals of magnesium and nitrogen were formed, as was shown in experiments at the PETRA III X-ray source of the German Electron Synchrotron (DESY) in Hamburg.

Among other things, the researchers discovered crystals with the chemical formula Mg₂N₄, which are composed of magnesium cations (Mg²⁺) and nitrogen anions (N₄⁴⁻). These homoatomic nitrogen molecules are composed of four single-bonded nitrogen atoms that form a horseshoe-shaped structure.

This high-energy polynitrogen entity has never been synthesized before; whether through high pressure methods or conventional chemical approaches. Moreover, the scientist also observed the compound to survive the pressure release and be stable at ambient conditions.

“We were surprised when we noticed that these nitrogen ions embedded in the crystal structures remain stable at normal air pressure and room temperatures. The N₄⁴⁻ entity is only the fourth discovered polynitrogen unit and is the only one, so far, that can solely be obtained with high pressure technologies,” said Dr. Dominique Laniel.

The Bayreuth researchers are confident that a process for the synthesis of a polynitrogen-only compound can be developed. The result would be a high-energy material that is highly attractive for a variety of industrial applications and, above all, as an energy source for extended space travel. “Anyone looking for fuel to fly to Mars should look to polynitrogen compounds in the future,” says Prof. Dr. Natalia Dubrovinskaia from the Bayreuth Laboratory for Crystallography.

However, a decisive hurdle still has to be overcome for these applications: To date, the magnesium-nitrogen crystals containing the high-energy nitrogen anions have only been able to be produced in very small quantities under extreme pressures and temperatures in the laboratory. A process for industrial-scale synthesis has not yet been developed.

“It is quite possible, however, that the stable crystals produced in our high-pressure experiments will be suitable as blueprints to be reproduced one day using other, technically less sophisticated methods. In this respect, experimental high-pressure research is doing pioneering work in the search for high-energy materials,” says Laniel.

“With the research results now published in Nature Communications, the door is wide open to using high-pressure research methods to produce new high-energy materials of which we are currently unsure whether they can even exist,” adds Prof. Dr. Leonid Dubrovinsky of BGI.

Research Funding:
Dr. Dominique Laniel came to the University of Bayreuth in 2019 as a Research Fellow of the Alexander von Humboldt Foundation. Here he conducts research with Prof. Dr. Natalia Dubrovinskaia at the Laboratory of Crystallography and with Prof. Dr. Leonid Dubrovinsky at the Bavarian Research Institute of Experimental Geochemistry & Geophysics. The research work in Bayreuth, which has now led to the publication in “Nature Communications”, was also funded by the German Research Foundation (DFG) and the Federal Ministry of Education and Research (BMBF).

Cooperation partners:
Together with the research team at the University of Bayreuth, scientists from the German Electron Synchrotron in Hamburg and the Goethe University in Frankfurt am Main also participated in the new study.