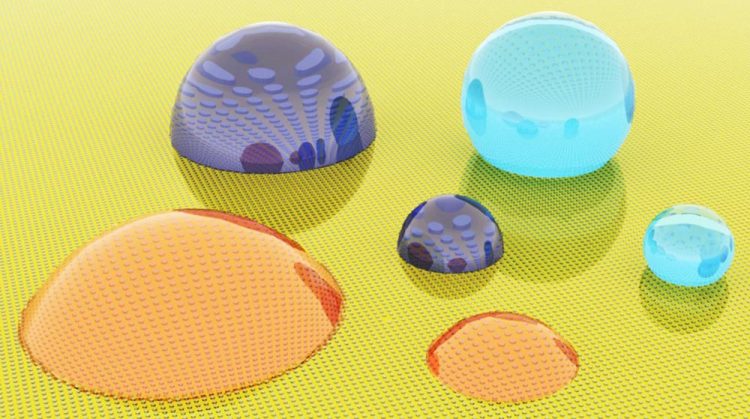 “Our surfaces combine the unique surface architectures of lotus leaves and pitcher plants in such a way that these surfaces possess both high surface area and a slippery interface to enhance droplet collection and mobility. Mobility of liquid droplets on rough surfaces is highly dependent on how the liquid wets the surface. We have demonstrated for the first time experimentally that liquid droplets can be highly mobile when in the Wenzel state.”

Liquid droplets on rough surfaces come in one of two states: Cassie, in which the liquid partially floats on a layer of air or gas, and Wenzel, in which the droplets are in full contact with the surface, trapping or pinning them. The two states are named for the physicists who first described them. While the Wenzel equation was published in 1936 in a highly cited paper, it has been extremely challenging to verify the equation experimentally.

“Through careful, systematic analysis, we found that the Wenzel equation does not apply for highly wetting liquids,” said Birgitt Boschitsch Stogin, graduate student in Wong's group and coauthor of “Slippery Wenzel State,” published in the online edition of ACS Nano.

“Droplets on conventional rough surfaces are mobile in the Cassie state and pinned in the Wenzel state. The sticky Wenzel state results in many problems in condensation heat transfer, water harvesting and ice removal. Our idea is to solve these problems by enabling Wenzel state droplets to be mobile,” said Xianming Dai, postdoctoral scholar in Wong's group and the lead author on the paper.

In the last decade, tremendous efforts have been devoted to designing rough surfaces that prevent the Cassie-to-Wenzel wetting transition. A key conceptual advance in the current study is that both Cassie- and Wenzel-state droplets can retain mobility on the slippery rough surface, foregoing the difficult process of preventing the wetting transition.

In order to make Wenzel state droplets mobile, the researchers etched micrometer scale pillars into a silicon surface using photolithography and deep reactive-ion etching, and then created nanoscale textures on the pillars by wet etching. They then infused the nanotextures with a layer of lubricant that completely coated the nanostructures, resulting in greatly reduced pinning of the droplets. The nanostructures also greatly enhanced lubricant retention compared to the microstructured surface alone.

The same design principle can be easily extended to other materials beyond silicon, such as metals, glass, ceramics and plastics. The authors believe this work will open the search for a new, unified model of wetting physics that explains wetting phenomena on rough surfaces.

Shikuan Yang, post-doctoral scholar in Wong's group, also contributed to the work. A National Science Foundation CAREER Award and a Graduate Research Fellowship, and the Office of Naval

Research (MURI award) supported this work. The researchers performed their work in the Penn State Nanofabrication Laboratory, part of the National Nanotechnology Infrastructure Network (NNIN), funded by the National Science Foundation. A U.S. provisional patent has been filed for this work.