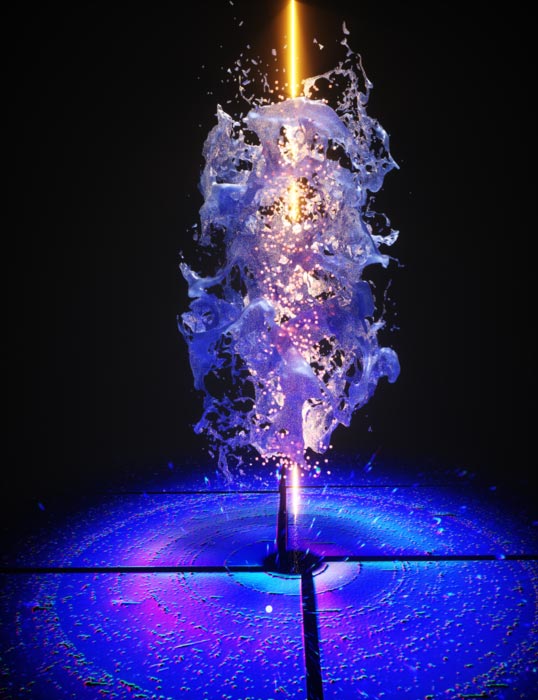 High-speed X-ray free-electron lasers have unlocked the crystal structures of small molecules relevant to chemistry and materials science, proving a new method that could advance semiconductor and solar cell development.

Compounds that form tiny crystals hold secrets that could advance renewable energy generation and semiconductor development. Revealing the arrangement of their atoms has already allowed for breakthroughs in materials science and solar cells. However, existing techniques for determining these structures can damage sensitive microcrystals.

Now scientists have a new tool in their tool belts: a system for investigating microcrystals by the thousands with ultrafast pulses from an X-ray free-electron laser (XFEL), which can collect structural information before damage sets in. This approach, developed over the past decade to study proteins and other large biological molecules at the Department of Energy’s SLAC National Accelerator Laboratory, has now been applied for the first time to small molecules that are of interest to chemistry and materials science.

Researchers from the University of Connecticut, SLAC, DOE’s Lawrence Berkeley National Laboratory and other institutions developed the new process, called small molecule serial femtosecond X-ray crystallography or smSFX, to determine the structures of three compounds that form microcrystal powders, including two that were previously unknown. The experiments took place at SLAC’s Linac Coherent Light Source (LCLS) XFEL and the SACLA XFEL in Japan.

The new approach is likely to have a big impact since it should be “broadly applicable across XFEL and synchrotron radiation facilities equipped for serial crystallography,” the research team wrote in a paper published today in Nature.

Researchers used the method to determine the structures of two metal-organic materials, thiorene and tethrene, for the first time. Both are potential candidates for use in next-generation field effect transistors, energy storage devices, and solar cells and panels. Mapping thiorene and tethrene allowed researchers to better understand why some other metal-organic materials glow bright blue under ultraviolet light, which the scientists compared to Frodo’s magical sword, Sting, in The Lord of the Rings.

“Determining the crystal structure of materials is the starting point to implementing them into devices and thinking about the engineering applications,” UConn researcher and paper co-author Elyse Schriber said.

Yet many materials resist being formed into the large crystals needed for standard X-ray crystallography, said Nicholas Sauter, a computer scientist at Berkeley Lab. “Most substances instead form powders,” he said, “whose X-ray diffraction patterns are harder to disentangle.”

Solving crystal structures with smSFX could accelerate modeling of other microcrystal structures and lead to discovery of new materials that are used for molecular machines, wear mechanisms in batteries, and fuels, LCLS Director Mike Dunne said: “It’s exciting research that takes LCLS in a new direction. This type of cross-over science, leveraging advances in bioscience into other areas such as advanced materials science, is a great example of how our DOE user facilities can bring together different areas of the research community.”

Each new crystal structure is uploaded to a worldwide crystallographic database hosted by Cambridge University, Schriber said, where scientists can use it to test theories and help find compounds that are useful for a specific task. In other crystal mapping methods, researchers often cherry-pick the best crystals in a set to model, she said, whereas with smSFX, “we are able to get a more holistic view of the crystals over the entire set, so it’s a better model of what a material looks like.”

The experiment did not go seamlessly, but a little ingenuity saved the day. For XFEL serial crystallography experiments, microcrystals need to be delivered to the X-ray beam through a liquid sample delivery system. The researchers tried to deliver the microcrystals using methanol but found it to be incompatible with the epoxy on a nozzle through which the liquid sample flowed. In some cases, it melted the nozzle.

To add to their stress, they knew that they could not deliver their microcrystals using water because their crystals had waxy organic components that made them hydrophobic. Water would clog the system and stick crystals to the sides of delivery system piping.

In a pickle with little beam time to spare, the team remembered that dish detergent had been used for remediation of oil spills. They quickly searched and found a bottle of detergent, mixed it with water, dubbed the combination “duck sauce,” and sent the mixture through the delivery system.

“I never in my life thought I’d be singing the praises of dish soap, but it is a fantastic suspender for our materials,” Schriber said. “If we had not used the detergent-water mixture we would not have been able to complete our experiment at all.”

The future of fragile crystals

As for what’s next, researchers want to map the crystal structures of a large variety of materials because “any one of them could have an incredible property that we don’t know about,” Schriber said.

“Having a structure all of a sudden opens up the opportunity to predict many other material properties,” she said.

The research team also says that the XFEL-smSFX process could become faster, leading to the discovery of a vast number of unknown crystal structures, and they’re working on streamlining the method.

In addition to LCLS, parts of this research were carried out at the SACLA XFEL in Japan, the National Energy Research Scientific Computing Center (NERSC) and Berkeley Lab’s Molecular Foundry and supported by the DOE Office of Science. NERSC and LCLS are DOE Office of Science user facilities.