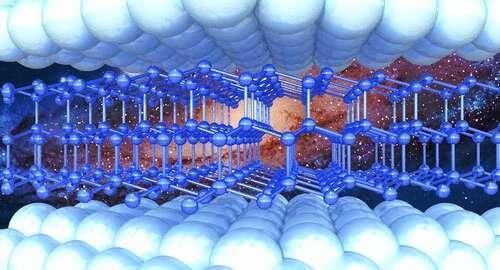 Scientists from the Skoltech Center for Energy Science and Technology (CEST) have developed a method for modeling the behavior of 2D materials under pressure. The research will help create pressure sensors based on silicene or other 2D materials. The paper was published in the ACS Nano journal.

Silicene, which is regarded as the silicon analog of graphene, is a two-dimensional allotrope of silicon. In its normal state, bulk silicon is a semiconductor with a diamond crystal type structure. As it thins down to one or several layers, its properties change dramatically. However, it has not yet been possible to study the change in the electronic properties of 2D materials at high pressure.

Scientists from Russia, Italy, the United States, and Belgium have developed a theoretical research method relying on quantum chemistry to study the electronic properties of 2D materials under pressure using silicene as an example. In contrast to carbon, which is stable in both 3D and 2D states, silicene is metastable and easy to interact with the environment.

“Silicon is a semiconductor in its bulk state and a metal in the 2D state. The properties of monolayer and multilayered silicene are extensively studied theoretically. Silicene is corrugated rather than flat due to the interactions between the neighboring silicon atoms. An increase in pressure should flatten silicene and change its properties, but this effect cannot yet been investigated experimentally,” explains Skoltech research scientist Christian Tantardini.

In most cases, experimental tools used to apply pressure to the material along the axis normal to its plane simultaneously produce compression in the in-plane directions of 2D material. Thus, the resulting measurements would hardly be accurate, so right now modeling appears to be the only plausible approach.

“In our case, a new theoretical approach was the only solution. As pressure is applied only along one direction, we simulate the compression of our material and try to figure out what is the reason for the changes in the electronic structure, arrangement of silicon atoms and their hybridization under different pressures, and why the layers flatten,” Skoltech Senior Research Scientist Alexander Kvashnin comments.

Accurate prediction of the behavior of silicene or other 2D materials under pressure would make silicene a promising candidate for pressure sensors. When placed inside the sensor, silicene could help determine pressure based on the material’s response to compression. This kind of sensor could be used, for instance, in drilling rigs with a high requirement for pressure control to increase the drilling force without damaging the equipment.

“We used silicene in our modeling study to test the method which could also work for other 2D materials, including more stable ones that are already manufactured and used extensively, at zero pressure,” says Xavier Gonze, a visiting professor at Skoltech and a professor at the Université Catholique de Louvain (UCLouvain) in Belgium.

Skoltech is a private international university located in Russia. Established in 2011 in collaboration with the Massachusetts Institute of Technology (MIT), Skoltech is cultivating a new generation of leaders in the fields of science, technology and business, is conducting research in breakthrough fields, and is promoting technological innovation with the goal of solving critical problems that face Russia and the world. Skoltech is focusing on six priority areas: data science and artificial intelligence, life sciences, advanced materials and modern design methods, energy efficiency, photonics and quantum technologies, and advanced research. Web: https://www.skoltech.ru/.