A plethora of states in magic-angle graphene 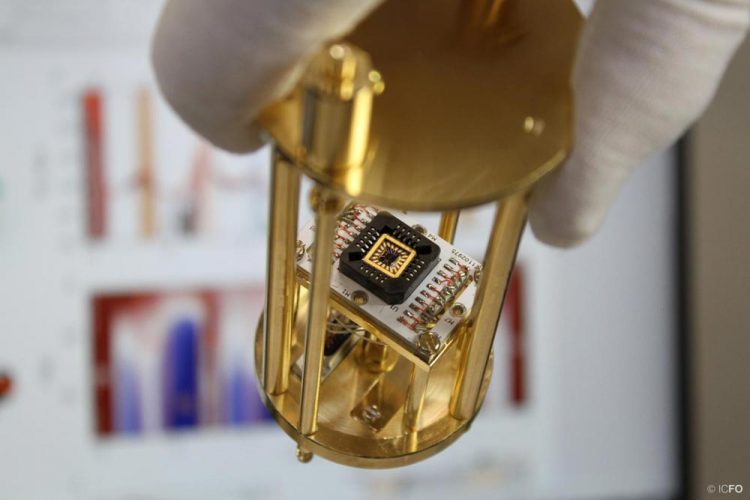 Close-up of the device placed onto the piece that later is adjusted to the experimental setup ©ICFO Credit: ICFO

Now, researchers from ICFO in Barcelona have succeeded in vastly improving the device quality of this setup, and in doing so, have stumbled upon something even bigger and totally unexpected.

They were able to observe a zoo of previously unobserved superconducting and correlated states, in addition to an entirely new set of magnetic and topological states, opening a completely new realm of richer physics.

Room temperature superconductivity is the key to many technological goals such as efficient power transmission, frictionless trains, or even quantum computers, among others. When discovered more than 100 years ago, superconductivity was only plausible in materials cooled down to temperatures close to absolute zero.

Then, in the late 80's, scientists discovered high temperature superconductors by using ceramic materials called cuprates. In spite of the difficulty of building superconductors and the need to apply extreme conditions (very strong magnetic fields) to study the material, the field took off as something of a holy grail among scientists based on this advance. Since last year, the excitement around this field

has increased. The double mono-layers of carbon have captivated researchers because, in contrast to cuprates, their structural simplicity has become an excellent platform to explore the complex physics of superconductivity.

The new study recently published in Nature was carried out by ICFO researchers Xiaobo Lu, Petr Stepanov, Mohammed Ali Aamir, Ipsita Das, led by ICFO Prof. Dmitri Efetov, with support from ICFO Prof. Adrian Bachtold's research lab, and in collaboration with an interdisciplinary group from UT Austin, the Chinese Academy of Sciences, and the National Institute of Materials Science of Japan. In their experiment, using a “tear and stack” van der Waals assembly technique, the scientists at ICFO were able to engineer two stacked monolayers of graphene, rotated by only 1.1º – the magic angle.

They then used a mechanical cleaning process to squeeze out impurities and to release local strain between the layers. In doing this, they were able to obtain extremely clean twisted graphene bilayers with reduced disorder, resolving a multitude of fragile interaction effects.

By changing the electrical charge carrier density within the device with a nearby capacitor, they then saw that the material could be tuned from behaving as an insulator, to behaving as a superconductor, or even an exotic orbital magnet with non-trivial topological texture – a phase never observed before. What is even more astounding is the fact that the device entered a superconducting state at the lowest carrier densities ever reported for any superconductor, a completely new breakthrough in the field.

Xiaobo Lu, first author of the study, thrilled with the results, says “To our surprise, we observed that the system seemed to be competing between many novel states. By tuning the carrier density within the lowest two flat moiré bands, the system showed correlated states and superconductivity alternately, together with exotic magnetism and band topology. We also noted that these states were very sensitive to the quality of the device, i.e. accuracy and homogeneity of the twist angle between two sheets of graphene layers.”

Last but not least, in this experiment, the researchers were also able to increase the superconducting transition temperature to above 3 kelvin, reaching record values which are twice as high as previously reported studies for magic-angle-graphene devices.

As ICFO Prof. Dmitri Efetov comments, “we never expected to see so many different states by just tuning the electronic gate. This was totally unexpected. For the first time we are able to delve into the microscopic world and manipulate the systems to see what happens in order to start understanding and finding models that can explain it.”

What is exceptional about this approach is that graphene, a material that is typically poor on strongly interacting electron phenomena, now has been the enabling tool providing access to this complex and exceptionally rich physics. So far, there is no theory that can explain the superconductivity in magic angle graphene at the microscopic level, however with this new discovery, it is clear that a new chance to unveil its origin has emerged.

ICFO – The Institute of Photonic Sciences (http://www.icfo.eu) was founded in 2002 by the Government of Catalonia and the Universitat Politècnica de Catalunya (UPC), both of which are members of its board of trustees along with the Cellex and Mir-Puig Foundations, philanthropic entities that have played a critical role in the advancement of the institute since 2007. Located in the Mediterranean Technology Park in the metropolitan area of Barcelona, the institute currently hosts 400 people, organized in 26 research groups in 60 state-of-the-art research laboratories. Research lines encompass diverse areas in which photonics plays a decisive role, with an emphasis on basic and applied themes relevant to medicine and biology, advanced imaging techniques, information technologies, a range of environmental sensors, tunable and ultra-fast lasers, quantum science, photovoltaics and the properties and applications of nano-materials such as graphene, among others. In addition to two state awarded Severo Ochoa accreditations of excellence, ICFOnians have been awarded 15 ICREA Professorships and 35 European Research Council grants. ICFO participates actively in the European Technological Platform Photonics21 and is also very proactive in fostering entrepreneurial activities, spin-off creation, and creating collaborations and links between industry and ICFO researchers. To date, ICFO has helped create 7 start-up companies.