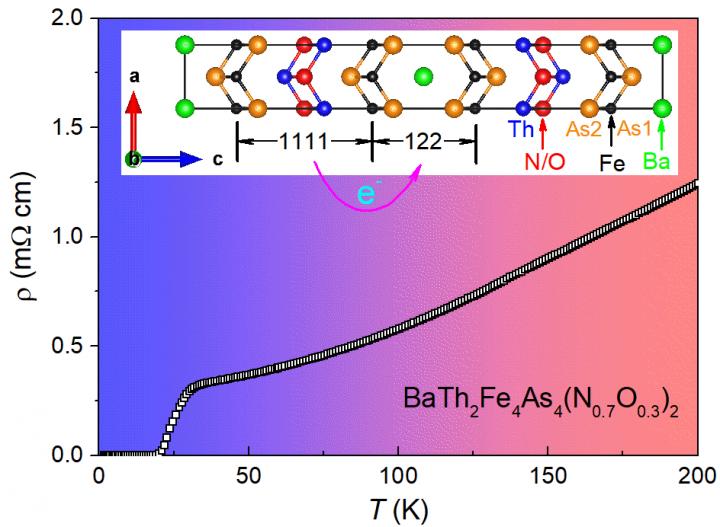 Temperature dependence of electrical resistivity for the BaTh2Fe4As4(N0.7O0.3)2 sample, indicating a superconducting transition at 30 K. The zero-resistance temperature is 22 K. The inset shows the crystal structure projected on the ac plane. The two constituent structural blocks, named "1111" and "122" respectively, are marked, and the inter-block charge transfer is shown by the arrow. Credit: ©Science China Press

Namely, the oxygen-free phase, BaTh2Fe4As4N2, could not be prepared albeit of the lattice matching. The realized synthetic process is actually a redox reaction, BaFe2As2 + 2ThFeAsN0.7O0.3 = BaTh2Fe4As4(N0.7O0.3)2, which indicates an essential role of inter-block charge transfer for stabilizing the intergrowth structure.

Note that, while both the constituent structural blocks share identical iron atoms, they contain crystallographically different arsenic atoms, as a consequence of the charge transfer.

Although the new superconductor is isostructural to the previous “12442-type” ones, it shows contrasting structural and physical properties. First, the structural details in the FeAs layers are different from those of hole-doped 12442-type IBSCs, but similar to most electron-doped IBSCs.

Second, the Hall-effect measurement shows negative Hall coefficient in the whole temperature range, and the Hall coefficient values are consistent with the electron doping level due to the oxygen substitution. Third, the superconducting properties such as the upper critical fields and specific-heat jump are close to most electron-doped IBSCs.

The onset resistive transition temperature of the new double-FeAs-layer IBSC is 30 K, and the zero-resistance temperature is 22 K. Correspondingly, the magnetic susceptibility and specific-heat data suggest two transitions, and the bulk superconductivity appears at 22 K. The result is in contrast with the single-FeAs-layer counterpart, ThFeAsN0.85O0.15, with the same doping level. The latter does not show superconductivity above1.8 K.

The essential role of inter-block charge transfer demonstrated seems to be insightful, which could be helpful for the exploration of broader layered materials beyond the layered IBSCs.