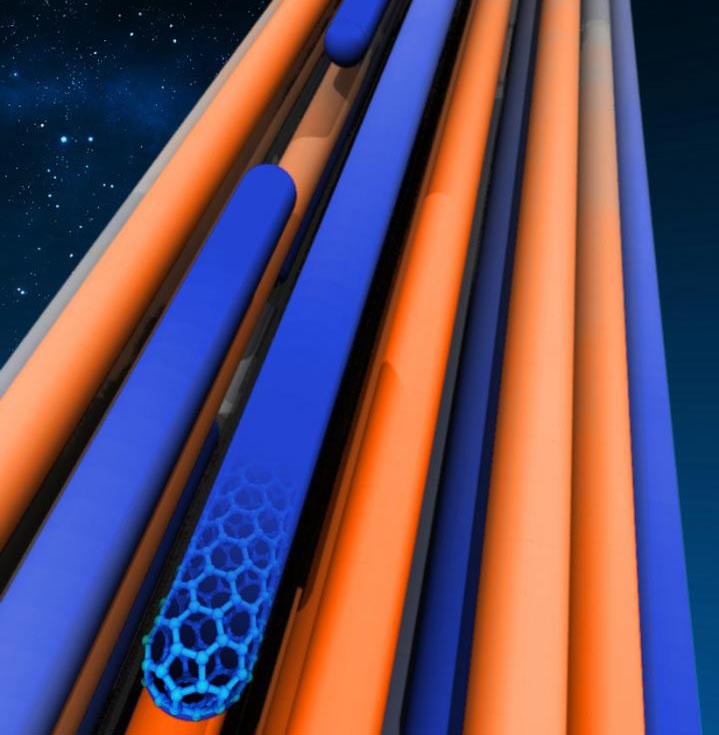 Rice University researchers modeled the relationship between the length of carbon nanotubes and the friction-causing crosslinks between them in a fiber and found the ratio can be used to measure the fiber's strength.
Illustration by Evgeni Penev/Rice University

Carbon nanotube fibers are not nearly as strong as the nanotubes they contain, but Rice University researchers are working to close the gap.

A computational model by materials theorist Boris Yakobson and his team at Rice’s Brown School of Engineering establishes a universal scaling relationship between nanotube length and friction between them in a bundle, parameters that can be used to fine-tune fiber properties for strength.

The model is a tool for scientists and engineers who develop conductive fibers for aerospace, automotive, medical and textile applications like smart clothing. Carbon nanotube fibers have been considered as a possible basis for a space elevator, a project Yakobson has studied.

The research is detailed in the American Chemical Society journal ACS Nano.

As grown, individual carbon nanotubes are basically rolled-up tubes of graphene, one of the strongest known materials. But when bundled, as Rice and other labs have been doing since 2013, the threadlike fibers are far weaker, about one-hundredth the strength of individual tubes, according to the researchers.

“One single nanotube is about the strongest thing you can imagine, because of its very strong carbon-carbon bonds,” said Rice assistant research professor Evgeni Penev, a longtime member of the Yakobson group. “But when you start making things out of nanotubes, those things are much weaker than you would expect. Our question is, why? What can be done to resolve this disparity?”

The model demonstrates how the length of nanotubes and the friction between them are the best indicators of overall fiber strength, and suggests strategies toward making them better. One is to simply use longer nanotubes. Another is to increase the number of crosslinks between the tubes, either chemically or by electron irradiation to create defects that make carbon atoms available to bond.

The coarse-grained model quantifies the friction between nanotubes, specifically how it regulates slip when the fibers are under strain and how well connections between nanotubes are likely to recover after breaking. The balance between length and friction is important: The longer the nanotubes, the fewer crosslinks are needed, and vice versa.

“Lengthwise gaps are just a function of how long you can make the nanotubes,” Penev said. “These gaps are essentially defects that cause the interfaces to slip when you start pulling on a bundle.”

With that inherent weakness as a given, Penev and lead author Nitant Gupta, a Rice graduate student, began to look at the impact of crosslinks on strength. “We modeled the links as carbon dimers or short hydrocarbon chains, and when we started pulling them, we saw they would stretch and break,” Penev said.

“What became clear was that the overall strength of this interface depends a lot on the capability of these crosslinks to heal,” he said. “If they break and reconnect to the next available carbon as the nanotubes slip, there will be an effective friction between the tubes that makes the fiber stronger. That’s the ideal case.”

“We show the crosslink density and the length play similar roles, and we use the product of these two values to characterize the strength of the whole bundle,” Gupta said, noting the model is available for download via the paper’s supporting information.

Penev said braiding nanotubes or linking them like chains would also likely strengthen fibers. Those techniques are beyond the capabilities of the current model, but worth studying, he said.

Yakobson said there’s great technological value in strengthening materials. “It’s an ongoing, uphill battle in labs around the world, with every advance in GPa (gigapascal, a measure of tensile strength) a great achievement.

“Our theory puts numerous disparate data in clearer perspective, highlighting that there’s still a long way to the summit of strength while also suggesting specific steps to experimenters,” he said. “Or so we hope.”

Rice alumnus John Alred, now a technologist at NASA’s Jet Propulsion Laboratory, is co-author of the paper. Yakobson is the Karl F. Hasselmann Professor of Materials Science and NanoEngineering and a professor of chemistry at Rice.

The Air Force Office of Scientific Research and computer resources via the National Science Foundation and Rice supported the research.

This news release can be found online at https://news.rice.edu/2021/01/19/a-little-friction-goes-a-long-way-toward-stronger-nanotube-fibers/

https://news-network.rice.edu/news/files/2021/01/0119_STRENGTH-1-WEB.jpg
Rice University researchers modeled the relationship between the length of carbon nanotubes and the friction-causing crosslinks between them in a fiber and found the ratio can be used to measure the fiber’s strength.
(Credit: Evgeni Penev/Rice University)

https://news-network.rice.edu/news/files/2021/01/0119_STRENGTH-2-WEB.jpg
Crosslinks between carbon nanotubes in a bundle are just as important as the length of the tubes to the overall fiber’s strength, according to researchers at Rice University who built a computational model of the phenomenon.
(Credit: Evgeni Penev/Rice University)