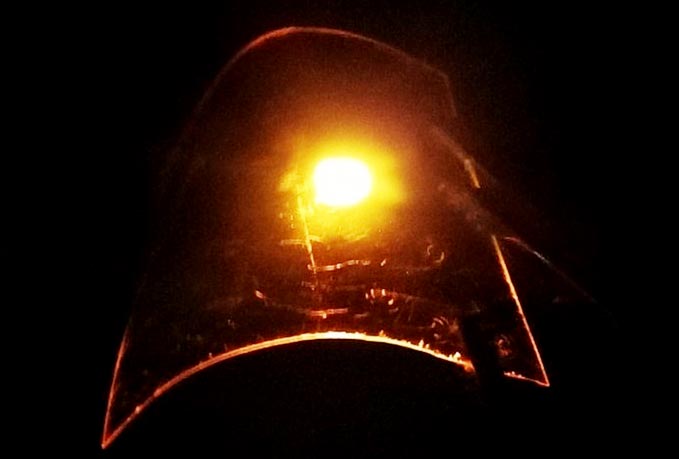 Giving off a comfortable glow, candles set the ambiance for a special dinner or just a quiet evening at home. However, some lighting alternatives, such as electronic candles, give off unwanted blue wavelengths that interfere with the body’s circadian rhythm. Now, researchers reporting in ACS Applied Electronic Materials have fabricated an improved bendable organic LED that releases candlelight-like light for flexible lighting and smart displays that people can comfortably use at night.

Previously, Jwo-Huei Jou and other researchers developed organic LEDs that released warm-white light, similar to that produced by candles. However, the devices still emitted some blue wavelength light, which can interfere with sleep because it dampens the body’s production of melatonin. These devices were made of solid materials and weren’t flexible. One option for making them bendable is to use a plastic backing, as has been done for other organic LEDs. But plastics don’t stand up well to repeated bending. Another option for the backing is mica — a natural mineral with extreme temperature tolerance that can be split into bendable, transparent sheets. So, Jou, Ying-Hao Chu and colleagues wanted to develop an even better organic LED and apply it to a mica backing, creating a bendable candle-like light with a long lifespan.

The researchers deposited a clear indium tin oxide film onto a transparent mica sheet as the LED’s anode, which could bend 50,000 times without breaking. Next, the team mixed the luminescent substance N,N’-dicarbazole-1,1’-biphenyl with red and yellow phosphorescent dyes to produce a light-emitting layer. This layer was then placed between electrically conductive solutions with the anode on one side and an aluminum layer on the other side, creating a flexible organic LED. When a constant current was applied to the device, it produced a bright, warm light with even less blue wavelength emissions than natural candlelight. Calculations showed that exposure to the LED for 1.5 hours would suppress a person’s melatonin production by about 1.6%, whereas light from a cold-white compact fluorescent lamp would suppress melatonin production by 29%. The researchers say that the flexibility of their candlelight-like organic LED opens up the design opportunities for blue-light-free nighttime devices.

The authors acknowledge funding from the Ministry of Science and Technology (Taiwan, Republic of China).