Gripper Arm from the 3D Printer 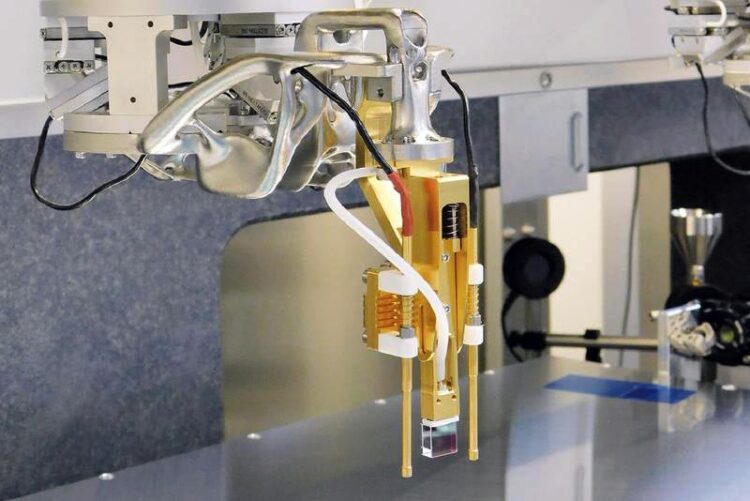 The gripper arm – the central tool for the high-precision alignment of space components – consists of a static and a moving part.
© Fraunhofer ILT, Aachen, Germany

The Fraunhofer Institute for Laser Technology ILT in Aachen has been developing and building laser systems for use in space for several years. At the same time, the Aachen scientists are also researching technologies for metallic 3D printing. Using the Laser Powder Bed Fusion (LPBF) process, Fraunhofer ILT – along with the Chair for Digital Additive Production DAP – has developed and set up a new precision gripper arm made of metal powder for the first time: a novelty for the assembly of space components in clean rooms. The gripper arm is lighter than its predecessor and yet stable enough to mount and adjust heavier laser optics with ultra-precision.

Laser systems for use in space

Vibration tests and climate chambers – these are typical stations used to qualify a laser system for use in space. Despite undergoing the highest loads, the laser systems must remain adjusted with micrometer precision in order to work safely in space.

In recent years, the assembly technology for such laser systems has been developed and continuously improved at Fraunhofer ILT in Aachen. The experts at Fraunhofer ILT work together with partners such as DLR, Airbus Defence and Space, TESAT Spacecom and ESA to build the optical systems with state-of-the-art technologies. All essential alignment steps are performed with manually guided robots using the Pick & Align process. A central tool is the gripper arm; it sits on a hexapod and positions the components in the optical assembly with micrometer precision. There they are adjusted to within a few micro-radians and fixed in place by soldering. The design of the gripper arm is decisive for the precision of the assembly and also determines how heavy the optical components can be.

With bionic design and additive methods to more load-bearing capacity

To further improve how well the setup technology performs, Fraunhofer ILT developed a completely new gripper arm. Based on its construction design, colleagues at the Chair for Digital Additive Production DAP at RWTH Aachen University also dimensioned the bionic structures in such a way that its payload could be increased while having lower dead weight. The topology-optimized gripper arm was finally manufactured via Laser Powder Bed Fusion, also at the DAP chair. Thanks to special post-processing, the gripper arm achieves cleanroom class ISO5.

This is an absolute novelty – until now, residual powder on the components prevented the use of additive methods for such precision tools in the clean room. The new gripper arm is divided into two parts with a static and a moving part. Supply lines for the required media are integrated into the gripper arm to minimize contamination.

For the missions of the future

This precision tool can move significantly heavier parts than the previously used tool, while at the same time enabling a more stable adjustment. “With this technology, we are breaking new ground. We don’t first design the component and then check whether it has the desired properties; instead, we optimize the component geometry for the load scenarios,” says Michael Janßen, who has been designing assembly grippers for years, describing the procedure.

The new gripper will be used within the framework of FULAS – a universal technology platform developed by the Aachen researchers for building laser systems in aerospace projects. “We have incorporated the experience gained from the entire FULAS development into the production of the new gripper,” summarizes project manager Heinrich Faidel from Fraunhofer ILT. A system based on FULAS is currently being built for the German-French climate mission MERLIN (Methane Remote Sensing Lidar Mission). The small MERLIN satellite is to be launched into space from Kourou, French Guiana, to map the distribution of methane in the Earth’s atmosphere. The satellite’s core component is a LIDAR laser that sends light pulses into the atmosphere and determines the methane concentration from the backscattered light.

Meet our experts at the 15th German Aerospace Regions Day on September 29, 2021 in Aachen. You can find more information here: https://s.fhg.de/azK

Clean air at all times