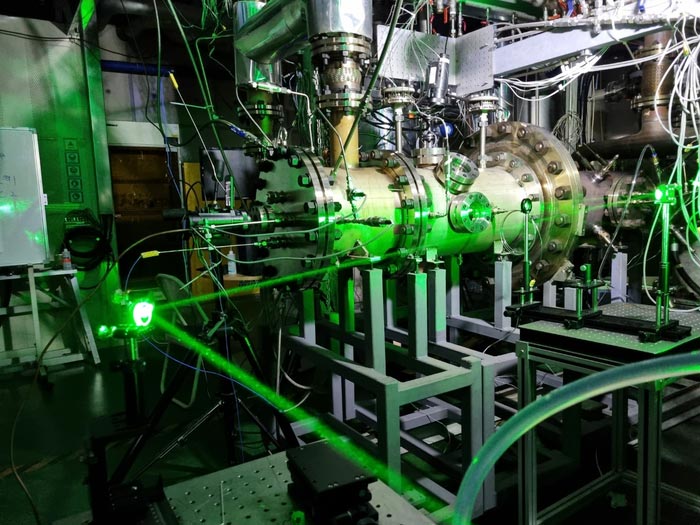 A photo of hydrogen mixed fuel combustor, developed by the research team led by Dr. Minkuk Kim, head of the Department of Zero-carbon Fuel and Power Generation at the KIMM Institute of Carbon Neutral Energy Machinery
Credit: Korea Institute of Machinery and Materials (KIMM)

An eco-friendly hydrogen combustor for domestic gas turbine that reduces carbon dioxide emissions has been developed and will be undergoing field test.

The Korea Institute of Machinery and Materials (President Sang Jin Park, hereafter referred to as the KIMM), an institute under the jurisdiction of the Ministry of Science and ICT announced that it has developed a hydrogen co-firing combustor for gas turbines used in power generation. This is the first time that such technology has been developed in South Korea, and KIMM has plans to perform a demonstration of its application to power plants.

Since July 2020, the research team led by Dr. Minkuk Kim, head of the Department of Zero-carbon Fuel and Power Generation at the KIMM Institute of Carbon Neutral Energy Machinery, has been developing an eco-friendly combustor for domestic gas turbines with 30% hydrogen co-firing, in collaboration with 13 industrial, academic, and research partners. A project for field demonstration will be started in 2023 with Korea East-West Power Company and Doosan Enerbility.

Hydrogen is highly reactive fuel so there is a risk of high temperatures and flashback. In order to prevent such risks, KIMM improved a fuel injection method, including fuel split, staging and modifying fuel holes. These were applied to the heavy duty gas turbine developed by Doosan Enerbility. As a result, it was possible that NOx and combustion instability were suppressed to the same level of the original LNG gas turbine while burning a mixture of 30% hydrogen fuel.

In the past, many efforts were made to promote the development of hydrogen co-firing combustors, but performance verification was difficult because there were no proper combustion test facilities in South Korea. So the combustor developed by KIMM was transferred to the German Aerospace Center (DLR) during the development process and successfully passed combustion tests in a high-pressure environment. These conditions mimic the actual operating conditions of the gas turbine, and its performance was verified accordingly. The development of hydrogen co-firing technology by domestic research institutes and its application to domestic gas turbines is a meaningful moment on the road to carbon neutrality in South Korea.

When gas turbines use fuel blended with 30% hydrogen, CO2 emissions can be reduced by 10.4% compared to 100% LNG power generation. KIMM plans to increase the percentage of hydrogen contents in fuel over 50% thereby 21.4% reduction of CO2 by 2024. In addition, the team is a focusing its research efforts with the goal of developing a 100% carbon-free hydrogen combustion technology by 2030.

KIMM also held a briefing on the development of a 300MW class gas turbine hydrogen co-firing combustor at the main office in Daejeon on October 12th. During this meeting, KIMM shared the details of their work on the core technology of modifying the hydrogen combustor. They also shared the results from Doosan Enerbility’s high-pressure combustion test results and announced Korea East-West Power Company’s Korea Institute of Future Convergence Technology’s plans to conduct power plant demonstrations of the hydrogen gas turbine.

At the briefing session, KIMM President Sang Jin Park stated, “In order to transition to an eco-friendly and carbon-free energy society, it is essential to develop hydrogen fuel conversion technology for medium and large-sized gas turbines and to conduct demonstrations at power plants. Currently, developments of combustion and turbine system are in their final stages. A decision of turbine manufacturers Doosan Enerbility and Korea East-West Power Company to test the new engine’s performance has made it possible to secure domestic hydrogen turbine technology that much sooner.” He also emphasized, “In order for domestic technology to be commercialized in a timely manner without failing, the government’s interest and support in selecting a demonstration site are necessary. This is because such a process is otherwise impossible through the will of the private sector alone due to the nature of the power generation industry.”

President Park added, “Unlike LNG heavy duty gas turbine in South Korea, which began as a fast follower, this hydrogen combustor is technologically equivalent to those from leading companies. If we can accelerate its commercialization through demonstration projects will help pave the way for South Korea’s next-generation new growth industry.”

The Korea Institute of Machinery and Materials (KIMM) is a non-profit government-funded research institute under the Ministry of Science and ICT. Since its foundation in 1976, KIMM is contributing to economic growth of the nation by performing R&D on key technologies in machinery and materials, conducting reliability test evaluation, and commercializing the developed products and technologies.

These research efforts were carried out with the support of the Ministry of Trade, Industry and Energy’s project for the “Development of a 50% Eco-Friendly High Efficiency Gas Turbine Combustor for 300MWe-class Power Generation” (2020-2024, KETEP 20206710100030).

World’s whitest paint now thinner than ever, ideal for vehicles