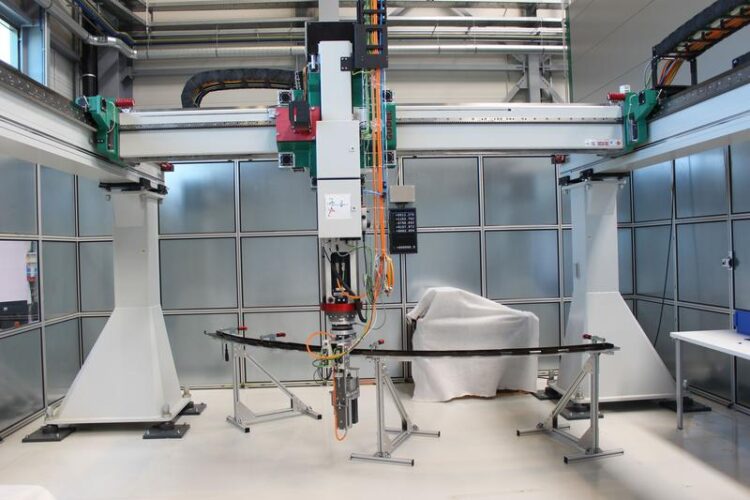 Automation is one of the most important strategies for increasing efficiency in production. The positioning and drilling end effector newly developed for a portal system to automate the pre-assembly of stiffening elements (cleats) on CFRP integral frames for the manufacture of aircraft fuselages – made available by project partner Airbus Hamburg – enables production rate increases both with constant quality and at lower costs. The previous manual production also required more process steps.

Alternatively, the compact end effector can also be picked up by standard industrial robots. The automation solutions developed by the experts for Automation and Production Technology at the Fraunhofer Institute for Manufacturing Technology and Advanced Materials IFAM in Stade in the “Impulse” sub-project “Tempo” (“Technologies for the efficient assembly and production of CFRP fuselage components”) have already been validated in near-series production environment on a full-scale prototype so that the project was successfully completed in 2020.

Frames are the transverse stiffening elements in the aircraft fuselage. The use of CFRP and the innovative, integral construction of fuselages in the A350 saves weight and production steps. Additional stiffening elements (cleats) are required to prevent the frame from bending sideways. The ribs, which can be up to 6 meters long, all differ from one another geometrically, so that a special mold template would be required for each rib in order to manually equip the components with cleats with tolerances of up to 0.2 millimeter. These templates are expensive and complex to use. In addition, manual cleat feeding and pre-assembly require large variances. Extensive measurement steps on the joined parts for exact position alignment would also be essential.

“The “Tempo“ project presented us with the challenge of automating the process steps in such a way that both the duration and the complexity of the process are reduced“, explains Leander Brieskorn, project manager from Fraunhofer IFAM. “The cleats should be picked up automatically and fed to the frame. In order to rivet the frame and cleat together, it was then necessary to drill through both components. We achieved this by equipping the frame with the cleats using our newly developed high-precision end effector. In addition, the frame was fitted to the fuselage shell without any gaps in our near-series fuselage assembly plant in Stade”, continues Brieskorn.

The developed positioning and drilling end effector fulfills the tasks of receiving different cleats, positioning them on different integral frames and simultaneously double drilling both components. The compactly built end effector can be picked up by the portal system used as well as by standard industrial robots. The portal system is selected for greater precision in positioning. The integral frame is stretched on stilts under the portal and can be oriented in space using several mechanical adjustment options. The end effector has a symmetrical holder with which it can pick up cleats of different orientations and clamp them to the holder. Using spring-damped mechanical stops, it approaches the respective joining positions with local precision. While the cleat stiffening element is placed on the integral frame surface from above and both components are clamped using a built-in mechanism, the drilling process is carried out from the back of the frame to prevent the CFRP from fraying. An extraction system picks up the resulting drilling dust. Once the components have been drilled, the positions of the cleats on the frame are defined. The cleats can then be riveted to the frame.

The end effector can be controlled via a system PLC and receives its global position data from imported CAD data of the components. The new assembly situation is adapted via a quick upstream measurement using a laser tracker. The innovative technology enables a reliable process and high positioning accuracy. Except pressing the start button on a control panel, everything else is running automatically. The specially developed user-friendly operator interface with self-explanatory images to facilitate input allows even inexperienced employees to quickly familiarize themselves with the control of the system.

By making appropriate modifications to the cleat pick-up, the end effector can also mount geometrically slightly different cleat types instead of the cleats used and position them precisely on different types of integral frames. The accuracy of the automated filing is ± 0.1 millimeter and thus exceeds the accuracy requirements by twice.

The measuring technology integrated in the positioning and drilling end effector documents exactly the required contact pressure of 200 Newton as well as many other parameters for monitoring the optimal conditions for the pre-assembly of the cleats on the integral frame. This guarantees online quality assurance.

The integral frame equipped with cleats was installed on the fuselage shell in a near-series fuselage assembly system in the “Tempo” sub-project at the Fraunhofer IFAM’s technical center in Stade. The measurement of the joint gaps between the integral frame and the fuselage skin showed that they were all smaller than 0.3 millimeter, making additional gap filling unnecessary.

The end effector developed for pre-assembly, positioning, and drilling of frames can also be used for the assembly of components in other industries, such as wind turbines-, rail vehicle-, commercial vehicle-, automotive- or shipbuilding, by adapting the mounting system.

After a period of three and a half years, the research project “Impuls“ (“Innovative, medium-term implementable and cost-saving solutions for CFRP fuselage components“) funded by the Bundesministerium für Wirtschaft und Energie (BMWi; the German Federal Ministry for Economic Affairs and Energy) ended in 2020, including the sub-project “Tempo“ (“Technologies for the efficient assembly and production of CFRP fuselage components“); BMWi funding number: 20W1526F. The Fraunhofer IFAM would like to thank the BMWi for the funding provided.