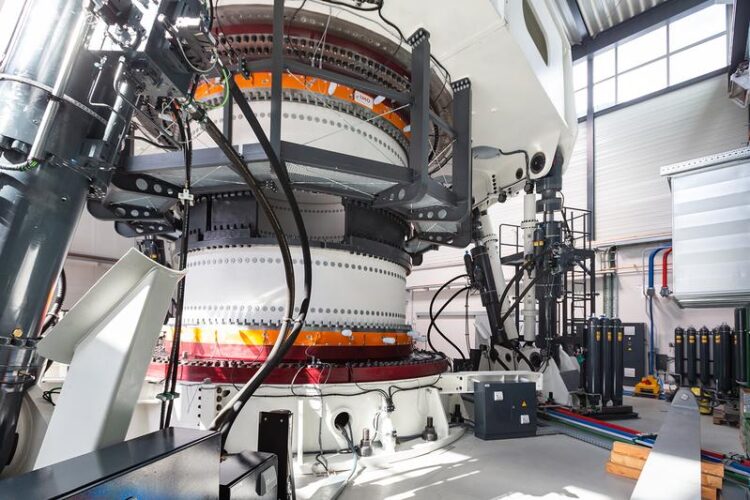 The Fraunhofer Institute for Wind Energy Systems IWES has completed a successful series of accelerated tests on rotor blade bearings at the bearing test bench in Hamburg. Within the scope of research and industry projects, bearings were subjected to dynamic endurance tests to increase their reliability and gain insights into the causes of wear. The first bearing tests were thoroughly successful with both the test method developed by Fraunhofer IWES and the test bench itself proving their worth. Accelerated test procedures allow the institute to acquire vital insights into damage mechanisms that can reduce future development costs and yield losses.

The accelerated testing of rotor blade bearings as part of research and industrial projects at Fraunhofer IWES has been a complete success. During testing, the load is applied to a bearing by means of six hydraulic cylinders on the BEAT6.1 (Bearing Endurance and Acceptance Test) test bench with up to 50 meganewton meters (MNm) of static load. The test bench also simulates the movements of a wind turbine during operation together with the associated load changes. This accelerated test can thus recreate loads equivalent to 20 years of operation in just four to six months. Since its commissioning in May 2019, the Fraunhofer IWES has tested a range of bearing types for a 7.5 MW wind turbine.

In the HAPT (Highly Accelerated Pitch Bearing Test) research project, the institute concentrated first and foremost on the use of IPC (individual pitch control) for rotor blade bearing endurance tests. IPC is a measure aimed at reducing wind turbine loads: It aligns the loads of the individual rotor blades against each other in order to reduce the loads acting on the wind turbine structure. The test results for the first bearings have shown that the wearing behavior can be recreated successfully on the test bench.

“During the tests, we demonstrated that the load application works with a dynamic accuracy of 0.1 percent. We were also able to test our continuous operation concept to great success. In addition, we gained valuable insights into the development of wear in blade bearings, which can subsequently prevent wear,” said Dr. Matthias Stammler, Senior Engineer at the Fraunhofer IWES.

Testing of the rotor blade bearings for the first industrial projects highlighted bearing-specific challenges which provide our customers with key insights into damage mechanisms. This, in turn, allows future development costs to be lowered and yield losses to be reduced.

The Fraunhofer IWES testing concept is continuously being optimized and expanded. For example, the institute is set to test a novel type of bearing in a next step: T-solid bearings.