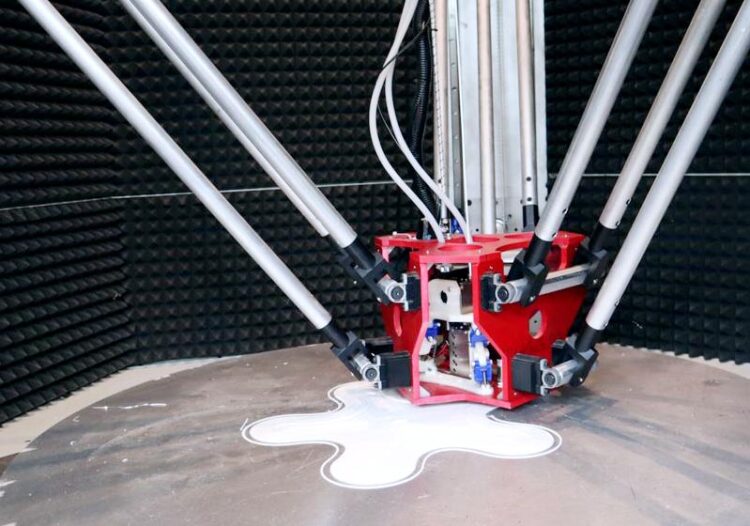 The printer head hovers above the printing plate, attached to three arms that form a triangle. This allows for the printing of exceptionally large parts.
Jacobs University Bremen

Making the construction of prototypes more efficient, cost-effective, faster and flexible – this will be possible with the world’s largest industrial delta 3D printer. The four-meter-high machine was developed by Professor Yilmaz Uygun’s research group at Jacobs University Bremen. The project, supported by the Kieserling Foundation, exhibits promising potential for industrial application and further research and cooperation opportunities for the university in Bremen-Nord.

In industries such as spare parts management, prototype construction, and mechanical and plant engineering, individualized parts are regularly required, which poses a challenge for these industries; on one hand the parts are complex in structure but are, on the other hand only needed in small quantities. Conventional manufacturing processes are hardly suitable for the production of such individual parts. It is uneconomical, sometimes even impossible, to produce these necessary parts – depending on their size and complexity.

This is where the project of Professor Yilmaz Uygun and his team at Jacobs University Bremen comes into play. Supported by the Kieserling Foundation, the research team led by Serkan Özkan has developed the world’s largest industrially usable delta 3D printer within a very short time. This additive manufacturing process makes it possible to efficiently produce complex individual parts for prototypes that are still in the test phase. This means that their design can be flexibly and economically adapted to the test results and renewed as required.

The printed parts are created using the additive manufacturing process are currently used in vertical wind turbines as part of a university project. Further projects for various industries are planned. The printing speed is currently around 5kg per hour – depending on the complexity of the desired printout.

The speed as well as the printing material – currently filament, i.e. strings consisting of conventional plastics such as PLA, PET or ABS – are aspects where Uygun still sees great potential in the future.

Excess material, which is printed as a support structure for curved and fine parts and subsequently disposed of, could be shredded and recycled as pellets: “We are currently developing a pellet extruder to be able to produce pellets and use them as input material instead of filament,” said Uygun. “This radically reduces the carbon footprint. In addition, we can reduce costs, secure the supply chain and ensure independence from specific suppliers and regions,” explained the Professor of Logistics at Jacobs University.

Uygun and his team are also focusing on further developing quality management during the printing process. One measure they are working on deals with a camera-based system that monitors the printing process visually. In the long term, “Honeycomb,” as the 3D printer has been named, should correct itself in the event of deviations in the print. “Our goal is to bring Honeycomb directly into production. We have several ideas to speed up printing without sacrificing quality.” The team is researching the simultaneous use of multiple print heads with nozzle openings of different sizes, which would be used for product geometries of varying complexity and at correspondingly different speeds. “If this is successful, the system could be used directly in production,” said Uygun.

They chose the name Honeycomb because it describes the internal structure of the printed parts. The honeycomb structure renders an outcome with less material and the manufactured piece is light and stable. Another contribution to efficiency and sustainability. “There are already several interested parties for pilot projects,” said Uygun.

About Jacobs University Bremen:
Studying in an international community. Obtaining a qualification to work on responsible tasks in a digitized and globalized society. Learning, researching and teaching across academic disciplines and countries. Strengthening people and markets with innovative solutions and advanced training programs. This is what Jacobs University Bremen stands for. Established as a private, English-medium campus university in Germany in 2001, it is continuously achieving top results in national and international university rankings. Its more than 1,600 students come from more than 110 countries with around 80% having relocated to Germany for their studies. Jacobs University’s research projects are funded by the German Research Foundation or the EU Research and Innovation program as well as by globally leading companies.

Combined and efficient: Two steps to the goal