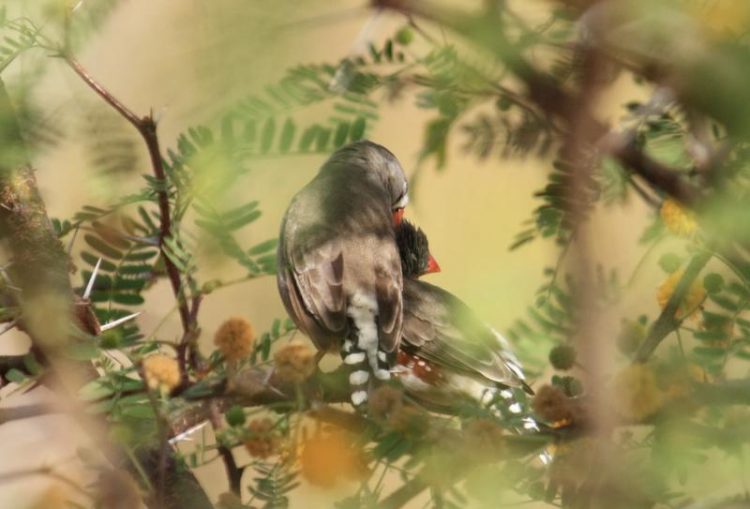 Songbird song is a conspicuous behaviour that not only fascinates bird lovers but has turned into a major scientific research objective. Due to their complexity, songs can easily be quantified and song changes can be related to various biological processes.

Calls are less conspicuous and might be less complex in structure, therefore the investigation of calls has been rather neglected by researchers – even though they are frequently used by songbirds for direct communication.

This is also the case in the zebra finch, a songbird native to Australia that lives in colonies and produces several thousand calls per day. So far it was not possible to investigate in detail the role of these calls due to the difficulty to record and assign individual calls in the presence of conspecifics, let alone in a large group.

Using state-of-the art recording techniques, scientists from the Max Planck Institute for Ornithology now succeeded at this task. They equipped the birds with small radio transmitter backpacks and were able to record the entire call repertoire of the individuals within a group.

In total 32 finches wearing this backpack were first kept in single-sex aviaries to get used to this high-tech equipment. Recordings began when the researchers transferred four males and four females into a large aviary.

Shortly thereafter the birds started to form pairs and as soon as nesting material was available, they immediately commenced with nest building which was followed, albeit not in all pairs, by egg laying. The researchers found that during the breeding cycle, but especially when pairs began building nests, the birds changed the usage of certain calls and started using different call types, in particular more so-called “cackle” calls.

Calls were characterised by exactly timed back-and-forth interactions, and, over time, were directed more and more towards their partner than other members of the group.

Pairs that performed more of these call exchanges during nesting were more likely to lay eggs. Thus, both the timing and the type of calls used in pair communication are important for a successful breeding attempt, says Lisa Gill, first author of the study. Zebra finches form life-long pairs and live in predominantly arid habitats in Australia.

They are able to breed year-round as long as their unpredictable environment permits, for example when sudden rainfall occurs. For this, pairs must be able to quickly change their reproductive status for successful breeding. “A flexible call repertoire in response to a changing environment could be important for the birds’ biological fitness”, concludes Gill. (SL)