One worm, two mouths – A devious evolutionary path between genetics and environment 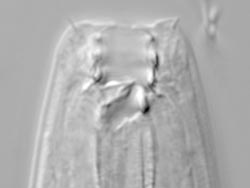 The roundworm Pristionchus pacificus with a narrow mouth. The worm mainly uses it for grazing on bacteria.<br><br>© MPI f. Developmental Biology<br>

A team of researchers at the Max Planck Institute for Evolutionary Biology in Tübingen, Germany, headed by Ralf J. Sommer have now discovered a developmental biological switch that determines the worm’s mouth form. According to this, the scientists are now able to explain how organisms adapt to different surrounding conditions.

When it comes to survival, flexibility is a trump card. This principle also applies to the microscopic roundworm Pristionchus pacificus, which is being researched by scientists at the Max Planck Institute for Developmental Biology in a study headed by Ralf Sommer. Depending on the environment in which Pristionchus grows, it develops either a short wide mouth or a long narrow one. The wide-mouthed variant, which has a single, characteristic tooth, is suitable for carrying out predatory attacks. The narrow version, in contrast, is mainly used for grazing on bacterial food sources.

The developmental path taken by a Pristionchus larva is not decided by its genes but by the environment. When the animals were starved or when too many worms crowded the Petri dish, the researchers observed the increased development of the wide-mouthed variant.

Erik Ragsdale, Manuela Müller, Christian Rödelsperger and Ralf Sommer have now discovered a crucial interface between the worm’s environment and its developmental genes. The Tübingen-based scientists found a gene which functions like a switch and selects the suitable variant from the two possible mouth forms.

The discovery of this gene was the crowning success of a genetic experiment, to which roundworms are particularly suited due to their short generation time. Ragsdale and Müller discovered mutated worm lines which only produce worms with narrow mouths, irrespective of the environmental conditions, and in which the same gene, eud-1, is inactivated. “We were able to show that a gene that we found in a genetic experiment under laboratory conditions controls an ecologically significant characteristic,” comments Max Planck Director Sommer, explaining the special significance of this discovery.

eud-1 is the gene for a sulfatase. Sulfatases are enzymes that chemically alter other proteins or molecules. The scientists in Tübingen do not yet know precisely which molecules are the targets of this special sulfatase. They presume, however, that eud-1 influences the characteristics of hormonal messenger substances. This would fit with their observation that eud-1 is mainly active in the worm’s neurons – where important messenger substances are produced.

Armed with the information about the eud-1 mutants, Ragsdale and his colleagues crosschecked their findings and introduced additional copies of the eud-1 gene into Pristionchus worms using genetic engineering tricks. Almost all of these transgenic worms developed the wide mouth form with the characteristic tooth.

eud-1 thus works like a train dispatcher at a large railway station who decides which platform a high-speed train can pull into based on the current traffic situation. During a critical phase in the worm’s development, it follows the one-way track to a “wide mouth” or “narrow mouth”.

The capacity of many organisms to tailor their development to the changing demands of the environment is known as “phenotypic plasticity”. The discovery of the des eud-1 gene is important because the molecular-genetic mechanisms that facilitate this plasticity in the animals have been largely unknown up to now.

“Phenotypic plasticity is often referred to as an explanation for evolutionary adaptations to different environmental conditions. We provide an example of a genetic mechanism that enables such evolutionary bifurcations,” says Sommer.

Exactly how the environment and genes interact is a controversial topic among evolutionary biologists in certain respects. It is clear that the environment selects between genetically different variants – this is Darwin’s natural selection. However, researchers like American biologist Mary-Jane West-Eberhard claim that the environment can also directly influence the emergence of new phylogenetic characteristics.

In the case of a “plastic” characteristic like the shape of the mouth aperture, external circumstances determine whether it presents in one form or another. West-Eberhard and other scientists suspect that a characteristic determined by the environment in this way can then become permanently defined at genetic level. Speciation or the division of species could even arise in this manner. However, this is little more than a controversial theory, for which hardly anything by way of experimental proof could be provided to date.

With the discovery of the switch gene eud-1, the Max Planck scientists in Tübingen have identified a genetic mechanism that fits well with this hypothesis. Hence, complex evolutionary models with plasticity and environmental influences as driving forces may perhaps be more than controversial musings.