Working out why plants get sick 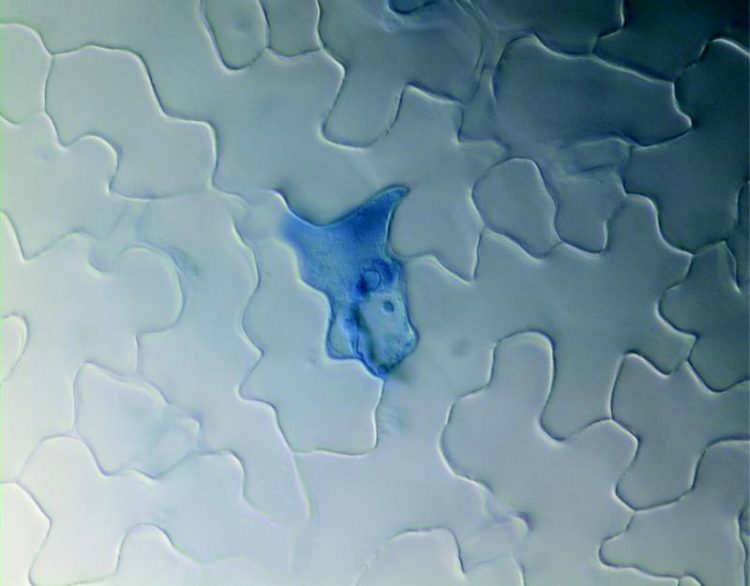 A Phytophthora spore penetrates the leaf epidermis cell of an Arabidopsis plant whose immune system has previously been weakened by mutations. Photo: Lore Westphal, IPB

If we consider the most serious plant diseases of our time, potato blight would definitely be near the top, with its pathogen – Phytophthora infestans – having triggered major famines in Europe as early as the mid-19th century and is, even today, still responsible for major crop losses. Scientists at the Leibniz Institute of Plant Biochemistry (IPB) in Halle (Germany) have spent more than two decades investigating late blight.

To shed more light on the mechanisms of disease development, they focus not only on determining why the pathogen causes disease on its host plant potato, but also its inability to successfully colonize most other plants.

This so-called non-host resistance against the infestation of P. infestans has been investigated on thale cress Arabidopsis thaliana. Led by Professor Sabine Rosahl, the Halle researchers were able to isolate two new substances from the model plant, which play key roles in defending against Phytophthora.

Although one of these newly discovered indole compounds had no direct effect on the pathogen, the substance is thought to play a signaling role and enhance the plant's defense reaction. This finding was published in Journal of Biological Chemistry.

Like all living beings, plants are constantly surrounded by potential pathogens, but rarely succumb to the same. This is because, like animals, plants have a similar kind of basic immunity that successfully prevents them from being colonized by microbial germs. Most plants muster multiple defense responses, which helps them avoid becoming hosts to the pathogens and, thus keeps a broad spectrum of invaders in check.

First and foremost, non-host resistance is dependent on recognizing the enemy, a task performed by receptors in the plant cell membrane that specialize in binding microbial surface structures such as fungal chitin or bacterial flagellin. The process of binding the microbial molecules activates the receptor and lets it transmit an ‘enemy alert’ to the cell interior and from there, via complex signal cascades, to the cell nucleus.

This is the venue for activating various defense genes, which then initiate the production of biosynthesis enzymes. These enzymes produce abundant antimicrobial substances that either kill the pathogen or preclude any further germs from entering the cells by reinforcing the local cell walls.

An in-depth investigation is now underway by the scientists from Halle to find precisely which genes, proteins and enzymes are involved in the non-host resistance of thale cress. Professor Rosahl's group is also particularly interested in the various defense substances produced by Arabidopsis to combat pathogens such as Phytophthora. As part of these efforts, small droplets of a Phytophthora spore solution were applied to the Arabidopsis plant leaves, while water droplets on the leaves of other Arabidopsis plants served as controls.

After 24 hours, an inventory was then taken of all the metabolites present in the droplets and surrounding leaf tissue in a metabolite profiling process, which clearly revealed the following: The plants infected with Phytophthora showed a strongly activated metabolism, with numerous substances in both the droplets and surrounding leaf tissue, which were undetectable in the control plants.

In addition to known substances, often with antimicrobial properties, two previously unknown indole compounds came to light: 4-methoxyindole-3-methanol and 4-methoxyindole-3-methylcysteine. Interestingly enough, neither showed antimicrobial properties since they did not inhibit the growth of Phytophthora hyphae. However, the former induced a weak but highly significant increase in calcium ions in the Phytophthora-infected Arabidopsis cells.

“Boosting the intracellular calcium ions in this way paves the way for resistance early on,” explains Sabine Rosahl. “It enables the interaction of signaling proteins and equates to a general state of alarm from a defense perspective.” 4-methoxyindole-3-methanol also increased the pathogen-induced cell wall reinforcement. And the conclusion of Professor Rosahl: “We therefore assume that this newly discovered compound actually works to modulate and enhance the natural immune response of non-host resistance” – although precisely how remains unclear for now.

The findings obtained inside and outside the affected plant cells revealed how a successful defense reaction requires not only functional biosynthesis enzymes, but also transport proteins that actively channel the defensive substances produced from the plant cell to the site of the wound.

However, although this transporter protein (PEN3) was isolated some years previously in Arabidopsis, the task of attributing any defense-relevant substance for this protein, which was actually transported out of the cell, had proved elusive. Now, however, that hurdle has been crossed in the present study. Collaboration with Swiss scientists revealed that the newly discovered indole compounds were transported by the PEN3 transporter from the cells to the leaf surfaces.

At the IPB, the insights gained from the model plant in turn affects the knowledge of the disease in the crop plant. Potato plants also produce antimicrobial substances following infestation with Phytophthora, which would be actively transported to the leaf surface under normal circumstances. In potatoes, however, the process of transporting certain antimicrobial substances appears to be disturbed; something which the Halle plant researchers were able to prove a few years ago for one specific substance named coumaroylagmatine.

Following infection with the pathogen, the hydroxycinnamic acid compound accumulated only within the potato leaves, but not on the leaf surface. By introducing an intact transporter protein from Arabidopsis, Sabine Rosahl's team could boost the immune reaction of potato plants to Phytophthora to a considerable extent, although completely stopping the onset of late blight in its tracks proved a bridge too far. This points to the presence of other weaknesses in the potato's immune system.

Meanwhile, the question of how Phytophthora managed to make the potato its host plant over the course of time remains tantalizing. The scientists from Halle will continue leveraging a successful combination of basic and application-oriented research into model and cultivated plants as part of ongoing efforts to answer such questions in future.

Background information: Phytophthora infestans
Phytophthora infestans, the pathogen of late blight in potatoes, belongs to the class of oomycetes, representative forms of which constitute a transitional form between fungi and brown algae. The pathogen spreads via spores that penetrate the leaf tissue and proceed to colonize the entire plant from there. If the spores are washed into the soil after rainfall, they also attack the tubers, which then become brown and inedible. The disease spreads rapidly and can infect entire fields in a matter of days. Although the use of fungicides to ward off Phytophthora has been moderately successfully to date, the very mutagenic nature of the pathogen enables it to quickly develop resistance to the pesticides used.