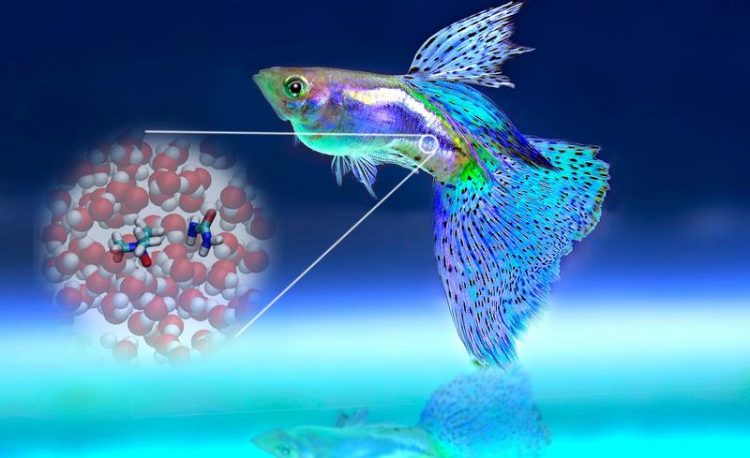 TMAO and urea are molecules that affect the osmotic pressure in living cells, so called osmolytes: With high concentrations of both urea and TMAO, marine animals can keep the osmotic pressure comparable to that of seawater. Additionally, TMAO and urea have side effects on proteins, which are also part of the cells. On the one hand, urea destabilizes proteins and leads therefore to cell death. TMAO, on the other hand, stabilizes the structure of proteins, as long as there is no excessive amount of it.

In living cells, it has been found that TMAO and urea co-exist at an approximate molecular ratio of 1:2 (TMAO:urea) and it was anticipated that the two molecules can bind to each other. While every molecule itself interacts with the proteins in a stabilizing or destabilizing manner, the combination of TMAO and urea does not interact with proteins anymore. Therefore, the positive or negative effect of TMAO and urea, respectively, is cancelled by the combination of both molecules.

The scientists at the Max Planck Institute for Polymer Research together with scientists in Japan, China and the U. S. investigated how this cancelation of effects of the two molecules occurs. It is commonly believed that TMAO and urea interact intermolecularly via the hydrogen atom, which is part of the urea molecule, and the oxygen atom of TMAO via so-called hydrogen-bonds. On contrary, some experimental studies pointed out that TMAO and urea don’t seem to form hydrogen bonds.

To solve this puzzle, the scientists studied the intermolecular interactions theoretically as well as experimentally. In their work, they studied TMAO and urea molecules dissolved in water. Studying the molecules in water, however, represented a challenge as the molecules move very fast and it is therefore difficult to obtain information on molecular binding. Thus, in a first step, the researchers performed high-level computer simulations of the two molecules showing how they bind together.

Based on the agreement between measurement and simulation, they found that TMAO and urea do not form hydrogen bonds when solved in water, in contrast to the commonly believed picture. They could show that the oxygen atom of TMAO does not interact with the hydrogen atom of urea, but prefers to bind to the hydrogen atom of water.

Therefore, the oxygen atom of TMAO is occupied by water molecules, which prevents urea to connect to TMAO by hydrogen bonds. However, to protect the inner-cell proteins, it is known that the two molecules connect to each other. The researchers found out that another part of the TMAO molecule, which is hydrophobic, connects to urea.

Molecular-level insights into how TMAO and urea interact in an aqueous environment is a key to understand their role as chemical chaperones, i.e. how TMAO and urea help cells to create proteins in a correct form to maintain protein functionality. In the context of synthetic biology, such understanding is a prerequisite for the design of synthetic chaperones. The results are published in the journal “Chem”.

The Max Planck Institute for Polymer Research (MPI-P) ranks among the globally leading research centers in the field of polymer research since its foundation in 1984. The focus on soft materials and macromolecular materials has resulted in the unique worldwide position of the MPI-P and its research focus. Fundamental polymers research on both production and characterization as well as analysis of physical and chemical properties are conducted by scientific collaborators from all over the world. Presently over 500 people are working at the MPI-P, the vast majority of whom are engaged in scientific research.