The weaker sex: Male honey bees are more susceptible than females to a widespread parasite 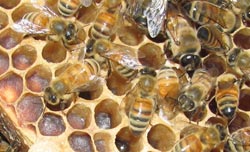 Originally from Asia, Nosema ceranae has rapidly spread throughout the world in recent years, and may contribute to the high number of colony deaths now observed in many regions of the northern hemisphere. These findings demonstrate the delicate nature of male honey bees, which are important to honey bee colony reproduction, to a well-distributed parasite.

Honey bees are complex social organisms that demonstrate haploid-diploidy. The two female castes, workers and queens, are diploid like humans. They contain two copies of each chromosome. Male honey bees, known as drones, on the other hand are haploid and contain only one chromosome set. The haploid susceptibility hypothesis predicts that haploid males are more prone to disease compared to their diploid female counterparts because dominant genes on one chromosome copy have the op-portunity to mask mutated genes on the other copy in diploid organisms.

A research team from the Vetsuisse Faculty of the University of Bern recently demonstrated in an article in the open-access journal PLOS ONE that male honey bees are significantly more susceptible (they die sooner and have poor body condition) to an exotic fungal intestinal parasite called Nosema ceranae compared to female worker honey bees. The parasite, originally from Asia, has recently spread to possess a near global-distribution during a period of high honey bee colony losses in many global regions. Because of its recent detection in honey bees outside of Asia, researchers are scram-bling to understand the parasite.

The observation that male drone honey bees die much sooner and have a poorer body condition compared to female worker honey bees when infected with the parasite Nosema ceranae is particular-ly worrisome, say’s doctoral student Gina Tanner: ‘Although drones do not perform important colony maintenance functions like cleaning and feeding like the workers, they are responsible for mating with queens so that the next generation of honey bees can be produced within a colony. Without strong, fit drones, the chance of successful matings with queens could be severely compromised.’ Recent stud-ies, mainly coming out of the United States, suggest that queen failure is a major cause of colony death. Early death of queens could be the result of queens not obtaining sufficient quantity and quality of sperm from drones during mating.

Honey bees, as all insect pollinators, provide crucial ecosystem and economic service which is rele-vant for our food security. Annually in Europe, more than 24 million honey bee colonies contribute to the production of 130,000 tons of honey and to the pollination of a range of agricultural crops – from carrots to almonds to oilseed rape – that is valued at €4 billion.

The study originated from the EU FP7 funded research consortium BEE DOC (Bees in Europe and the Decline of Honeybee colonies), and was performed by researchers affiliated to the Institute of Bee Health (University of Bern), the Swiss Bee Research Centre (Agroscope Swiss Confederation), and the Department of Ecology (Swedish University of Agricultural Sciences).