Warming climate could speed forest regrowth in eastern US 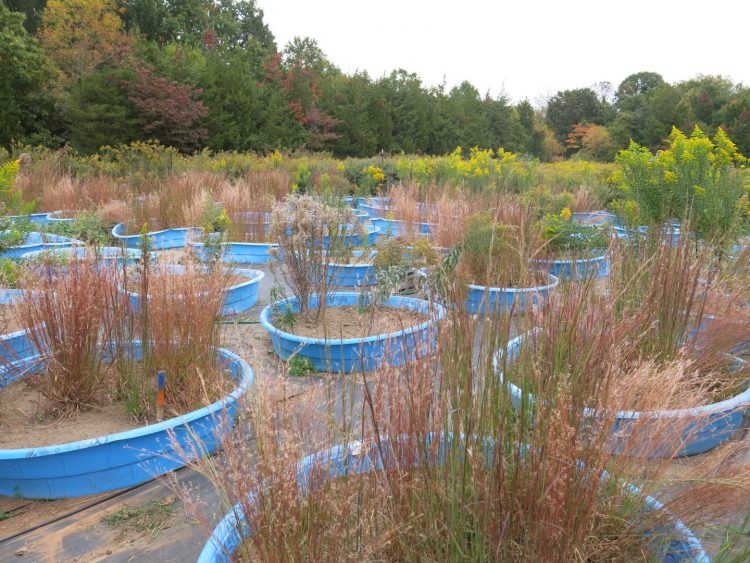 Researchers grew tree seedlings in plots with varying soil fertility, and with and without different mixes of early succession plants such as broomsedge and goldenrod. Credit: Photo by Jason Fridley, Syracuse University.

Climate change could speed the natural regrowth of forests on undeveloped or abandoned land in the eastern U.S., according to a new study.

If left to nature's own devices, a field of weeds and grasses over time will be replaced by saplings, young trees and eventually mature forest. Earlier research has shown that this succession from field to forest can happen decades sooner in the southeastern U.S. than in the Northeast. But it wasn't obvious why, especially since northern and southern fields are first colonized by many of the same tree species.

Now, a study published Proceedings of the National Academy of Sciences points to temperature as the major factor influencing the pace at which trees take over.

The results suggest that as temperatures rise, faster-growing forests on lands that humans have left idle could play a bigger role in removing carbon dioxide from the atmosphere, say researchers from Duke University and Syracuse University.

The team conducted the experiment at six sites up and down the eastern U.S., from New York to Florida.

At each site, the researchers followed the early lives of four tree species that are common early arrivals in abandoned farm fields — loblolly pine, black cherry, red cedar and sweetgum.

Using plastic wading pools as planters, they grew the trees from seed in plots with varying soil fertility, and with and without different mixes of early succession plants such as broomsedge and goldenrod.

In each plot the researchers also measured light availability, soil moisture, nutrients and other variables known to affect plant growth.

One possibility is that soil fertility is the main factor, said co-author Jason Fridley, associate professor of biology at Syracuse University. The thinking was that poorer southern soils produce a sparser carpet of weeds and grasses. This might in turn shade emerging tree seedlings to a lesser extent than in the north, and make it easier for them to grow up through the gaps.

But statistical analyses weighing the relative effects of soil fertility and other factors revealed that temperature was the biggest driver of tree seedling growth. Part of the reason is that milder winters and earlier springs mean a longer growing season, said Justin Wright, associate professor of biology at Duke.

The results are important because average annual temperatures in the eastern U.S. are predicted to warm by five to nine degrees Fahrenheit by the end of the century.

Rising temperatures could also bring more droughts, Wright cautions. But in the absence of drought stress, even minor warming will likely accelerate the transition from field to forest.

This also means that northeastern meadows that normally persist for decades may become shorter-lived, Fridley said. The forests that replace them probably won't mirror native forests, he added — especially if cold-intolerant trees that are common colonizers of southern fields find it increasingly easy to survive and take hold in the north.

“Certainly in the next 100 years and maybe in the next 50 years, fields will likely transition much faster to woody vegetation,” Fridley said. “The double whammy is the trees themselves are going to change too.”

But young, rapidly growing trees can potentially absorb more carbon dioxide than weeds and grasses as they convert the heat-trapping gas to the sugar they need to grow. That means that undeveloped or abandoned land, if left undisturbed, could soon play a bigger role in offsetting human sources of carbon dioxide emissions.

“Faster-growing forests on once-cultivated land aren't going to solve the climate change problem,” Wright said. “But one of the reasons we care about these abandoned sites is they have really high potential for carbon sequestration.”