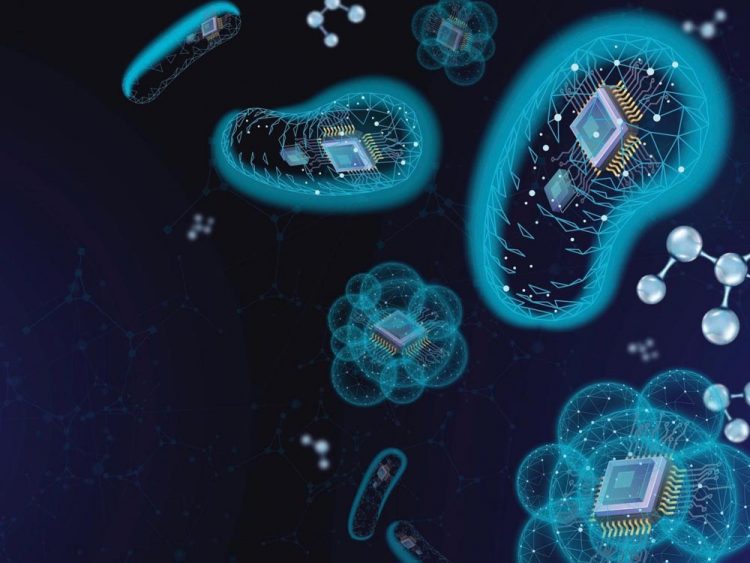 Secondary metabolites – the compounds produced by microbes to mediate internal and external messaging, self-defense, and chemical warfare – are the basis for hundreds of invaluable agricultural, industrial, and medical products.

And given the increasing pace of discovery of new, potentially valuable secondary metabolites, it's clear that microbes have a great deal more to offer.

Now, a team of microbiologists and genomicists led by the Department of Energy Joint Genome Institute (JGI) has invented a genetic engineering tool, called CRAGE, that could not only make studying these compounds much easier, but also fill significant gaps in our understanding of how microbes interact with their surroundings and evolve.

Their work, a collaboration with Goethe University Frankfurt and DOE Environmental Molecular Sciences Laboratory (EMSL), is published in Nature Microbiology.

Secondary metabolites are thusly named because their activities and functions aren't essential for a microbe's survival, yet they may give the organism an advantage in the face of environmental pressures. Encoded by groups of genes called biosynthetic gene clusters (BGCs), the ability to produce these metabolites is easily passed back and forth among both closely and distantly related microbes through horizontal gene transfer.

This rapid and widespread sharing allows microbes to adapt to changing conditions by quickly gaining or losing traits, and because the frequent swapping introduces mutations, horizontal gene transfer of BGCs drives the development of diverse compounds.

Unfortunately, the fascinating world of secondary metabolism has traditionally been very hard to study because when microbes are brought into the lab, an artificial environment that presents little hardship or competition, they typically don't bother making these compounds. CRAGE – short for chassis-independent recombinase-assisted genome engineering – helps scientists get around this roadblock.

“These metabolites are like a language that microbes use to interact with their biomes, and when isolated, they go silent,” said co-lead author Yasuo Yoshikuni, a scientist at JGI. “We currently lack the technology to stimulate microbes into activating their BGCs and synthesizing the complete product – a cellular process that involves many steps.”

CRAGE is a highly efficient means of transplanting BGCs originating from one organism into many different potential production hosts simultaneously in order to identify microbial strains that are naturally capable of producing the secondary metabolite under laboratory conditions.

“CRAGE therefore allows us to access these compounds much more readily than before,” said Helge Bode, co-lead author from Goethe University Frankfurt, Germany. “In several cases, it has already enabled us to produce and characterize for the first time a compound of interest.”

More broadly, by providing a technique to transfer microbial machinery from one species to another, CRAGE will enable scientists to go beyond theories and predictions and finally observe how compounds relegated to the category of “biological dark matter” actually work.

“This is a landmark development, because with CRAGE we can examine how different organisms can express one gene network differently, and thus how horizontally transferred capabilities can evolve. The previous tools to do this are much more limited,” said co-author David Hoyt, a chemist at EMSL, which located at the Pacific Northwest National Laboratory. Hoyt and his colleagues Kerem Bingol and Nancy Washton helped characterize one of the previously unknown secondary metabolites produced when Yoshikuni's group tested CRAGE.

Co-first author Jing Ke, a scientific engineering associate at JGI, added, “Looking beyond secondary metabolites, CRAGE can be used to engineer microbes for the production of proteins, RNAs, and other molecules with a huge range of applications.”

So far, the team has successfully transferred BGCs into 30 diverse bacterial strains, and expect that it should work in many others, though the technique will likely need to be adapted for some species. Further research and product development are currently underway, but the technique is now available to research teams who utilize JGI (a DOE Office of Science User Facility) through pilot programs.

Meanwhile, Yoshikuni – who developed the precursor gene recombinant tool, RAGE, in 2013 – and his JGI colleagues have begun applying CRAGE to their own projects, such as exploring unconventional bacterial hosts for biomanufacturing.

“Aside from a few very well-studied microbes, the so-called model organisms like E. coli, we don't know whether a strain will have the skills needed to perform all the steps of BGC activation,” said Yoshikuni. “Hopefully with CRAGE, we can start to shift that paradigm – we can look into more wild species and find their properties that are more suitable for a production of products and medicines.”

This work was supported by the DOE Office of Science, the DFG (German Research Foundation), and the LOEWE Center for Translational Biodiversity Genomics.

CRAGE is available for licensing through Berkeley Lab's Intellectual Property Office and for collaborative research through JGI's user programs.

DOE's Office of Science is the single largest supporter of basic research in the physical sciences in the United States, and is working to address some of the most pressing challenges of our time. For more information, please visit energy.gov/science.