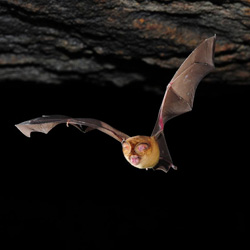 Paramyxoviruses originate from ubiquitous bats, from where the pathogens have spread to humans and other mammals. In total, this unique study tested 9,278 animals for viruses, leading to the discovery of an enormous number of new virus species.

This could make eradicating many dangerous diseases significantly more difficult than had been thought. For bats provide a reservoir from which viruses could come back after vaccination campaigns. The results of this study have just been published in the current issue of “Nature Communications.”

Where do viruses dangerous to humans come from, and how have they evol¬ved? Scientists working with Prof. Dr. Christian Drosten, Head of the In¬stitute for Virology at the Universitätsklinikum Bonn, have made sig¬nificant progress in answering this question. “We already knew from prior studies that bats and rodents play a role as carriers of paramyxoviruses,” said Prof. Drosten. The many varied members of this large virus family cause, e.g., measles, mumps, pneumonias and colds. The highly dan¬gerous Hendra and Nipah viruses cause types of ence¬pha¬litis that result in death for one out of two patients. Paramyxoviruses also play a role in veterinary medicine, causing e.g., canine distemper or rinderpest.
Researchers double the number of known paramyxovirus species

With support from numerous scientific institutes in Germany and around the world, they tested a total of 9,278 animals from Europe, South America and Asia, including 86 bat and 33 rodent species. “These ani¬mals live in very large social communities with millions of individuals in some cases,” reported the Bonn virologist. “Their close contact promotes mutual infection and provides for great variety in circulating viruses.” Using molecular biology methods, the scientists identified which virus species are rampant in bats and rodents. According to their own esti¬mates, they discovered more than 60 new paramyxovirus species. “That is about as many as the number that was already known,” said Drosten.

Bats are the original paramyxovirus hosts

Using computational biology methods, the scientists calculated a com¬mon evolutionary tree for the new and the known viruses. They then deduced, using mathematical methods, in which host animals the viruses have most likely taken up residence during their evolutionary history. “Our analysis shows that almost all of the forebears of today's para¬myxoviruses have existed in bats,” explained Prof. Drosten. “Just as with influenza, where we are keeping an eye on birds as a source of new pan¬demic viruses, we will now have to study the bat viruses to see if they are a danger to humans.” So, the current data might play a useful role in early detection and prevention of epidemics – a major new goal in virus research.

Mumps viruses have jumped to humans

The findings also included that the Hendra and Nipah viruses that cause encephalitis in Asia and Australia really came from Africa. “This results in an urgent need to conduct medical studies in Africa,” said the Bonn viro¬logist, adding that many disease cases on this continent remain unex¬plained and might possibly have been caused by such new viruses. In one case, the scientists have already found proof that bat viruses transfer directly to humans. “Our data show that the human mumps virus comes directly from bats – and can be found there to this day,” reported Prof. Drosten.

These results indicate that it may not be as easy to eradicate dangerous viruses as had been assumed. For eliminating an infectious agent perma¬nently from the population by means of vaccination requires that there are no animal hosts from which a new infection might come. “In bats, we assume that there is a vast reservoir of such agents,” said Drosten. “If the vaccination campaigns are stopped once a virus has been eradicated, this might present a potential risk – maybe we will have to rethink.” This is why Drosten advocates taking into account ecological data when planning vaccination campaigns. Eradicating bats or other wild animals would be neither possible nor sensible. “Bats and other small wild mammals are of immeasurable value for our planet's ecosystems,” Drosten summarized his and his colleagues' unanimous opinion.
Publication: Bats host major mammalian paramyxoviruses, Nature Communications, DOI: 10.1038/ncomms1796