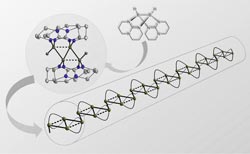 In the newly discovered coupling reaction, molecule A is transformed into four-atom boron chain B <br>

In synthetic chemistry, so-called element-element bonding can be systematically exploited to assemble small building blocks to obtain structures that are more complex than the “starting material” and can be used for the resource-saving production of more precious materials.

Scientists at Heidelberg University’s Institute of Inorganic Chemistry have discovered a hitherto unknown coupling reaction. Two positively charged compounds of the element boron join to form a new molecule with a chain of four boron atoms. The team headed by Prof. Dr. Hans-Jörg Himmel now intends to investigate the further implications of this unexpected bond formation.

In carbon chemistry, element-element coupling reactions play a crucial role. For example, small building blocks with very few carbon atoms of the kind produced by the steam cracking of crude oil are assembled to generate a broad range of products, including plastics, fuels, lipids and detergents, as well as more complex substances like pharmaceutical agents.

Due to this great significance, a large number of synthesis variants have been developed. In their research work the Heidelberg scientists focus on coupling reactions of this kind with compounds involving the element boron which are similar in structure to the corresponding carbon compounds.

As Professor Himmel explains, the new element-element combinations normally result from a reaction between two electrically neutral or differently polarised atoms, not between two positively or two negatively polarised ones. But now the Heidelberg researchers have discovered a coupling reaction in which two positively charged molecules bond together. This is made possible by so-called multi-centre bonding, which plays a significant role in boron chemistry. “The product of this reaction is a compound with four boron atoms,” says Prof. Himmel. “This in its turn is a promising precursor on the route toward the making of complex boron chains.”

Such compounds of the element boron were unknown so far, says the Heidelberg chemist. He and his team are now investigating the further combination of the four-atom boron chain to form boron chain polymers expected to possess high electrical conductivity and other useful material properties. Such materials would be of interest for electronic and optoelectronic applications, Prof. Himmel concludes. The research results have now been published in “Nature Chemistry”.