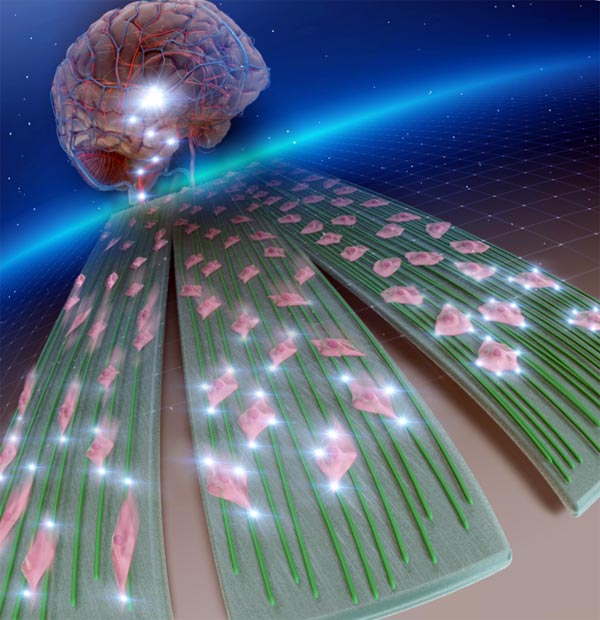 Glioblastoma multiforme (GBM) is an aggressive brain tumor that spreads along the white matter tracts of the brain. Now, researchers at University of Fukui, Japan, have managed to engineer nanofibers mimicking the brain that can stop them from spreading.
Credit: Cover for ACS Applied Bio Materials Vol. 4 No. 10, reused with permission from American Chemical Society

Researchers from Japan develop a platform based on nanofibers to trap brain cancer cells as a therapeutic strategy.

Our body heals its injuries by essentially replacing damaged cells with new cells. The new cells often migrate to the site of injury, a process known as “cell migration.” However, abnormal cell migration can also facilitate the transport and spread of cancer cells within the body. Glioblastoma multiforme (GBM) is one such example of a highly invasive brain tumor that spreads via migration of the tumor cells. The frequency at which such tumor cells spread and grow make conventional tumor removal methods ineffective. Furthermore, options such as radiotherapy and chemotherapy are harmful to healthy cells and cause adverse effects. In order to develop improved therapeutic strategies, a precise understanding of the invasion mechanism of GBM cells is necessary.

An alternative treatment strategy in consideration involves capturing the migrating tumor cells. It turns out that cell migration is dictated by the structure and the orientation of the “extracellular matrix” (ECM) – fibrous structures surrounding the cells. By engineering similar structures of desired geometries, it is, therefore, possible to exert control over the migration process.

Now in a study published in ACS Applied Bio Materials, researchers from University of Fukui, Japan, have designed a platform based on nanofibers that resemble the ECM to examine their effect on GBM cells. “We fabricated a nanofibrous sheet in which the fiber density changes from end to end gradually using a technique called ‘electrospinning’ and carried out a culture experiment of brain tumor cells,” says Dr. Satoshi Fujita, who headed the study.

The researchers observed clear distinctions in cell movement in nanofibers of different densities. They found that the denser fibers promoted the formation of “focal adhesions” clusters in the cells that resulted in a slower cell migration.

Taking advantage of this negative correlation between cell movement and fiber density, the researchers were able to control and direct the migration of cells by designing a nanofibrous sheet with stepwise varying densities. By arranging the fibers in a high-to-low density configuration, they were able to restrict the movement of cells as most of them were captured in the high-density zones. On the other hand, a low-to-high density configuration had the opposite effect and encouraged migration.

In addition, they noticed that the gaps between the zones hindered cell migration, leading to cells being trapped in the high-density zones. This one-way migration was observed for the first time and the researchers named it “cell trapping” after fish and insect traps that cause their prey to travel along a single direction before trapping it.

“The study demonstrates the feasibility of capturing migrating cells using electrospun nanofibers that mimic the microenvironment of the brain,” comments Dr. Fujita.

With such remarkable findings, the team is excited about the future prospects of their nanofiber-based platform. “It is available for the design of scaffolding materials, which are the basis of regenerative medicine, in combination with various fiber processing technologies and material surface treatment technologies. This could lead to the development of practical applications of regenerative medicines,” speculates Dr. Fujita, “In addition, it can be used as a processing technology for culture carriers for efficient production of biological drugs including proteins, antibodies, and vaccines.”

We certainly hope his visions are realized soon!

About University of Fukui, Japan
The University of Fukui is a preeminent research institution with robust undergraduate and graduate schools focusing on education, medical and science, engineering, and global and community studies. The university conducts cutting-edge research, including fiber and textile engineering, and strives to nurture human resources capable of contributing to society on the local, national, and global level.
Website: https://www.u-fukui.ac.jp/eng/

About Dr. Satoshi Fujita from University of Fukui, Japan
Dr. Satoshi Fujita is an Associate Professor at the Department of Frontier Fiber Technology and Science at University of Fukui, Japan. His research interests comprise nanofibers, biopolymers, biomaterials and their applications for tissue engineering, medical devices and drug delivery systems. He has published over 40 papers and has 7 patents under his name.