Typhoid Fever – A race against time 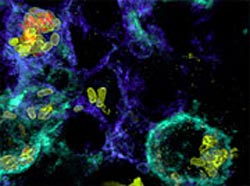 Prof. Dirk Bumann’s research group at the Biozentrum of the University of Basel has now uncovered how the typhoid pathogen repeatedly manages to evade the host’s immune system. Their findings are published in the scientific journal “Cell Host & Microbe”.

Typhoid fever is a bacterial infection caused by the pathogen Salmonella. The infected host’s immune system detects Salmonella and activates immune cells such as neutrophils and monocytes. These cells infiltrate the infected tissue and enclose the infection to form an abscess. Although most Salmonella bacteria are readily killed by this immune reaction, Dirk Bumann’s group has demonstrated that some escape from the abscess and thus ensure their survival.

Once outside the abscess, the Salmonella bacteria are attacked by other immune cells, the so-called macrophages that produce a less effective immune response. “Salmonella have developed a range of defense strategies to resist macrophage attacks. Many Salmonella are thus able to survive and even to replicate in macrophages,” explains Neil Burton, one of the two first authors. With time, abscesses form around the new infection foci but again some Salmonella bacteria can manage to escape.

A battle on many fronts

The whole disease process is a race between Salmonella and the immune system of the infected organism, in which the battle is fought on many fronts. In this process many Salmonella bacteria are killed and others survive to spread the infection. It is the net balance of the outcomes of these individual Salmonella and immune cell encounters which in the end determines the course of the illness.

Typhoid fever is a life-threatening infection in countries with poor hygiene. Each year, more than 20 million people are infected with this disease. The illness is transmitted by ingesting food or water contaminated with this bacterium. Once inside the intestine, Salmonella crosses the gut mucosa and spreads to other organs such as the spleen and liver. Growing antibiotic resistance makes this illness increasingly difficult to cure.

Understanding what factors enable Salmonella to win many encounters with host cells might provide new strategies in the treatment of typhoid fever. Similar heterogeneous encounters likely determine the fights between the host and many other pathogens. Findings of this study may thus be relevant for a wide range of infectious diseases.