The Tree of Life – When do Plants spin off new Species? 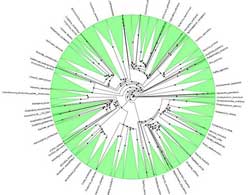 A circular layout of the BigPlantTree.<br>visualization tool: NSF iPlant Collaborative

The finding upends long-held thinking that plants' speciation rates are tied to the first development of a new physical trait or mechanism. The research has been funded by the U.S. National Science Foundation (NSF iPlant initiative) and the German Science Foundation (DFG).

Providence, RI [Brown University]/Heidelberg, Germany [Heidelberg Institute for Theoretical Studies]/New Haven, CT [Yale University] — Evolution has been successful for billions of years and produced a vast amount of successful new species, but we still do not understand the underlying mechanisms. Researchers from the U.S. and Germany have recently unraveled new parts of this process. They found that plants initially tinker with their configuration and performance prior to coming up with new, improved versions of themselves.

The issue at hand is when a grouping of plants with the same ancestor, called a clade, begins to spin off new species. Biologists laboring over assembling the tree of life have long assumed that rapid speciation occurred when a clade first developed a new physical trait or mechanism and had begun its own genetic branch. But the team, led by Brown post-doctoral researcher Stephen Smith, who is also affiliated to the Heidelberg Institute for Theoretical Studies (HITS), discovered that major lineages of flowering plants did not begin to rapidly spawn new species until they had reached a point of development at which speciation success and rate would be maximized. The results are published in the American Journal of Botany.

Evolution is not what we previously thought,” said Smith, who works in the laboratories of Brown biologist Casey Dunn and of HITS computer scientist Alexis Stamatakis. “It’s not as if you get a flower, and speciation (rapidly) occurs. There is a lag. Something else is happening. There is a phase of product development, so to speak.”

Research in this area is only possible with computational methods. “This is a nice example of how computer science and cyberinfrastructure initiatives can help to extend the limits of biological explorations” says Alexandros Stamatakis, group leader of the scientific computing group at HITS.

To tease out the latent speciation rate, Smith and co-workers computed the largest plant phylogeny (evolutionary tree) to date, involving 55,473 species of angiosperms (flowering plants), the genealogical line that represents roughly 90 percent of all plants worldwide. Reconstructing a tree of this size is also a technical milestone and a starting point for many other studies. The researchers looked at the genetic profiles for six major angiosperm clades, including grasses (Poaceae), orchids (Orchidaceae), sunflowers (Asteraceae), beans (Fabaceae), eudicots (Eudicotyledoneae) and monicots (Monocottyledoneae). Together, these branches make up 99 percent of flowering plants on Earth.

The common ancestor for the branches is Mesangiospermae, a clade that emerged more than 125 million years ago. Yet with Mesangiospermae and the clades that spun off it, the researchers were surprised to learn that the boom in speciation did not occur around the ancestral root; instead, the diversification came about some time later, although a precise time remains elusive.

Put another way, the authors write, “These findings are consistent with the view that radiations tend to be lit by a long ‘fuse,’ and also with the idea that an initial innovation enables subsequent experimentation and, eventually, the evolution of a combination of characteristics that drives a major radiation.”

Shifts in diversification aren`t often directly associated with the origin of the familiar group (orchids, sunflowers, etc.). There are many more shifts than one might imagine. The diversity patterns may be explained not just by a few major shifts, associated with the major groups, like flowering plants. Instead, the diversity of groups more likely reflects a composite of many individual, smaller bursts within clades. It wouldn´t be possible to see this very well in the context of small phylogenies

Smith believes some triggers for the speciation explosion could have been internal, such as building a better flower or learning how to grow faster and thus outcompete other plants. Or, the winning edge could have come from the arrival of pollinating insects or changes in climate. The team plans to further investigate these questions.

“Taken at face value, our analyses suggest that many bursts in speciation, spread quite evenly and hierarchically across the entire tree, are responsible for the evident success of the flowering plants,” explains Jeremy Beaulieu (Yale). Michael Donoghue (Yale) adds: “The possibility of working with phylogenetic trees of this size opens up all sorts of new research questions, but also clearly highlights the need for new statistical and computational tools. This area is in its infancy.”

The tree can be browsed on-line at: http://portnoy.iplantcollaborative.org/ (select BigPlantTree) thanks to resources provided by the NSF iPlantCollaborative and the efforts by Karen Cranston at the National Evolutionary Synthesis Center.