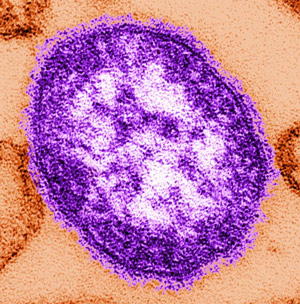 Measles virus is highly contagious. The probability of contracting the virus from an infected individual is greater than 90 percent, unless the person in question has been previously infected early in life or been vaccinated.

Despite current efforts to eradicate measles, local outbreaks occur occasionally due to insufficient vaccine coverage in the general population. Germany currently lags behind the rest of Europe in its efforts to eradicate measles. In 2017, the number of measles infections in Germany increased three-fold compared to 2016, and a total of 929 cases were reported in 2017.

Measles virus, like the highly infectious canine distemper virus used in this study, belongs to the genus Morbillivirus. It is known that during infection and replication the virus interacts with the infected host using two different receptors on host cells. Measles virus first uses a receptor on immune cells during infection, replicates at this location, and then later uses a second receptor on cells in the respiratory tract where they are then transmitted to the next host.

However, little is known about the extent to which the interaction between the virus and one or both cell receptors is responsible for transmission of the pathogen. Furthermore, researching the underlying mechanisms for measles presents a challenge because humans are the only hosts for measles virus.

Prof. Dr. Veronika von Messling, head of the Division Veterinary Medicine at the Paul-Ehrlich-Institut, and her research team have developed a surrogate model to research morbilliviruses. They use ferrets which are highly susceptible to canine distemper virus, a close relative of measles virus.

To identify the significance of receptor interactions for transmission, the researchers at PEI, in collaboration with researchers at the Mayo Clinic in Rochester, Minnesota, USA, infected ferrets with the natural canine distemper virus or virus mutants that were no longer able to interact with either of the cellular receptors.

As expected, the ferrets which came into contact with the natural canine distemper virus became infected and developed disease. In this context, animals that had already contracted the disease transmitted the virus in the most efficient manner. Conversely, genetically modified viruses which were able to use only one of the receptors were transmitted in isolated cases and did not cause disease.

This work provides proof of the significance of cellular receptor interactions for morbillivirus transmission. This interaction is also of central importance for viral spread. Clinically, these findings could be useful for the development of active substances that prevent this interaction in a targeted manner.

One advantage of such a strategy is that the development of resistance is highly unlikely. Those who could benefit from this strategy would be individuals lacking immunity to measles who would require treatment after coming into contact with measles-infected persons.

However, vaccination remains the best protection against measles.

http://jvi.asm.org/content/early/2018/05/17/JVI.00669-18.abstract – Abstract of this publication
https://www.pei.de/EN/information/journalists-press/press-releases/2018/08-trans… – This press release on the Paul-Ehrlich-Institut Website