The vir­uses of the North Sea 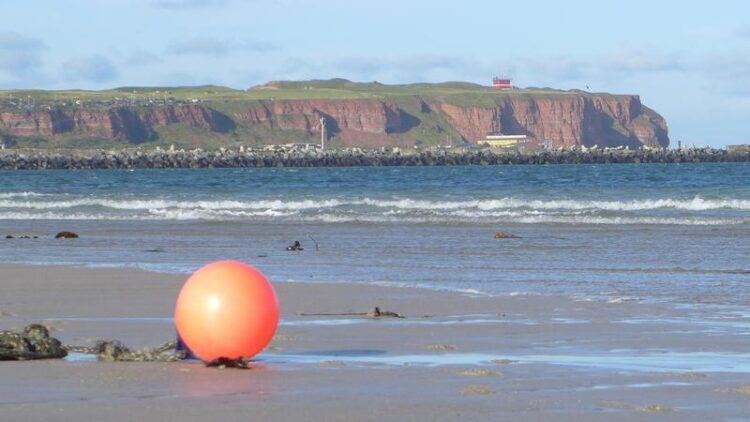 Helgoland is Germany's only true offshore island, known more for seabirds, seals and duty-free shopping than for viruses. However, these were precisely the focus of the MPI researchers.
Bild: Naomi Esken / Max Planck Institute for Marine Microbiology

A new study in ISME Journal provides exciting insights into the life of marine viruses in the North Sea during the spring bloom. Off the offshore island of Helgoland, researchers led by Nina Bartlau from the Max Planck Institute for Marine Microbiology found a dynamic viral community that can strongly influence the mortality of North Sea bacteria and thereby the carbon cycle of this habitat. They also discovered and isolated numerous new virus species.

On average, hundreds of thousands of tiny algae and a billion bacteria live in every liter of North Sea water. As if that were not enough, there are also 10 billion viruses in every liter. They primarily infect bacteria and have a large and diverse impact on their environment, for example by killing infected cells and causing them to decay, or by altering their gene expression or genetic material. Now, a study published in ISME Journal provides new insights into the life of these viruses.

“Despite their importance, viruses are rarely a focus of marine research,” says first author Nina Bartlau from the Max Planck Institute for Marine Microbiology. “To my knowledge, we hereby provide the first study dealing with viruses of Flavobacteria, which are the most common bacteria in spring blooms, in the North Sea.”

The researchers found many new and very diverse phages in the North Sea. Phages are viruses that infect bacteria. Accordingly, the viruses studied here, which are specialized to infect Flavobacteria, are called flavophages. “The abundance and types of phages changed during the spring bloom. For example, at the beginning of the bloom we found only a few phages, which increased in abundance over time. We were also able to show that a particular phage species was only present for a short period of time, after which only its relatives remained,” explains co-author Cristina Moraru from the Institute of Chemistry and Biology of the Marine Environment (ICBM) at the University of Oldenburg. Over the years, however, the community of viruses was quite stable: Different phages could be found and isolated in two consecutive years.

Bartlau and her colleagues have thus collected numerous pieces of evidence that indicate: Viruses have a major impact on bacterial mortality during the spring bloom. The bacteria are responsible for breaking down the remains of microscopic algae over the course of the bloom, which largely releases the carbon dioxide absorbed by the algae from the atmosphere. “There is a possible link here between the viruses and the global carbon cycle, which will certainly be very exciting to investigate,” says Bartlau.

Now also in the laboratory

The researchers also succeeded in cultivating numerous different and previously unknown viruses in the laboratory in Bremen. “We identified 10 new genera and also 10 new families,” says Bartlau. Many of them – 9 of the 10 genera and 4 of the 10 families to be exact – did not exist in culture before. “These new isolates now allow for exciting experiments in the lab to further our knowledge of flavophages and the role of viruses in the ocean,” Bartlau emphasizes. And this knowledge then goes far beyond the marine habitat, because some of the virus families isolated here also have members that live in freshwater, sewage and soil.