The “TRiC” to folding actin 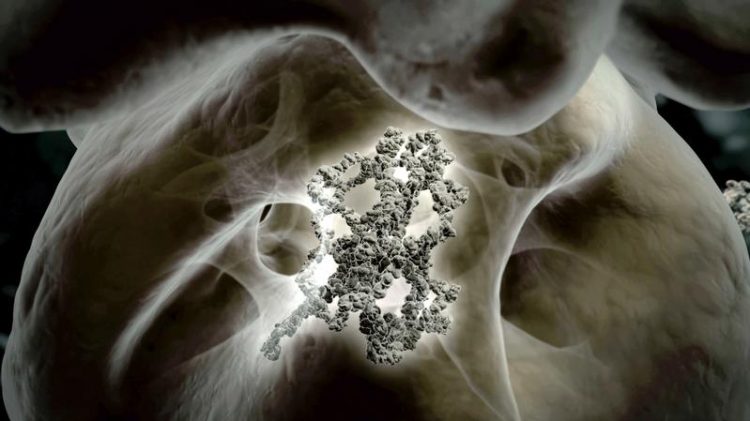 The actin amino acid chain (center) gets folded into the mature 3D-structure inside the cavity of the chaperonin TRiC. © Max Planck Society

Actin is the most abundant protein in highly developed cells and has diverse functions in processes like cell stabilization, cell division and muscle contractions. Like all proteins, actin is “born” at the ribosomes, the protein factories of the cell, which string together amino acids into a long chain.

Newly-synthesized proteins at the ribosomes are not yet able to fulfill their molecular functions in the cell. To reach their full activity, they must first adopt the correct three-dimensional fold. So far, it has been believed that the general information on this fold is encoded in the primary protein structure – the sequence of amino acids. Researchers from the department “Cellular Biochemistry” of MPIB director F.-Ulrich Hartl have now revealed the unique non-folding properties of the universal protein actin.

When children are born, they already have the inbuilt potential to develop into adults. Their maturation takes time and is assisted by parental care. Institutions like kindergartens help children mature safely by keeping them away from harmful influences. Nascent proteins are protected from intermolecular interactions that would hamper their folding by chaperones, molecular folding assistants.

Misfolded proteins can aggregate into toxic clumps, which damage cells and contribute to Alzheimer’s and Parkinson’s disease. Therefore, even though proteins can also fold in their absence, chaperones contribute to cellular health by improving the folding efficiency.

Unlike all previously studied proteins, actin cannot acquire its fold in absence of the chaperonin TRiC. “Typically, proteins spontaneously find their fold – chaperones just assist them by making the process more effective and keeping the protein away from interactions that would hamper folding. But actin is different because it absolutely requires the molecular folding help of TRiC. Actin is like a child that will never become a mature adult if it does not attend the TRiC-kindergarten “, says David Balchin, lead author of the study.

In comparison with similar proteins that build the cytoskeleton of bacteria, which are evolutionary older and simpler cells, the researchers found fundamental differences in the protein folding. “Actin has many more protein interaction partners than the bacterial cytoskeletal proteins, but it has lost the ability to fold independently. It seems like this molecular trade-off made the versatility of actin possible”, comments Balchin. The co-evolution of TRiC and actin has allowed actin to “out-source” the responsibility for protein folding to the chaperonin.

The organization of bacterial cells is less complex than in higher developed cells. Bacterial cytoskeletal proteins also require the help of chaperones to effectively reach a folded state. Simpler chaperones as they are found in bacteria cannot fold actin into its mature form. The researchers solved the protein structure of TRiC to study its function and found that it has a special mode of action for actin folding.

While bacterial chaperones are built of seven identical subunits, TRiC is built of eight different subunits. These subunits form a cavity inside which actin gets folded. “During the actin-folding process, the structure of TRiC changes, too. We found an asymmetric motion of the chaperone that is coordinated by the binding and lysis of ATP, energy-carrier molecules. This is much more complex than the chaperone-assisted protein folding that was known so far.”

The study of actin is the first description of a non-folder protein. “Our study opens up uncharted territory of protein characteristics”, says MPIB director F.-Ulrich Hartl. The finding of this extreme chaperone-dependency breaks with the dogma that all proteins have an inbuilt potential for folding in their amino acid sequence. Hartl further adds, “Actin is just one example of a protein that gets folded by TRiC, albeit a very prominent one. However, TRiC acts as a chaperone for around ten percent of all proteins. We are only beginning to understand how this special assistance in ‘protein childcare’ impacts the cells.” [CW]

About F.-Ulrich Hartl
Ulrich Hartl was born in 1957. He studied Medicine at the University of Heidelberg, where he afterwards gained his PhD. Hartl joined Walter Neupert’s research group at LMU as scientific assistant. A fellowship from the German Research Foundation (DFG) enabled him to undertake research at the University of California, Los Angeles. He did research as professor and Howard Hughes Medical Investigator at the Sloan Kettering Institute and at Cornell University in New York, USA. In 1997, the Max Planck Society succeeded in enticing the renowned scientist back to Germany. Since then, he is director and head of the Department of Cellular Biochemistry at the Max Planck Institute of Biochemistry.